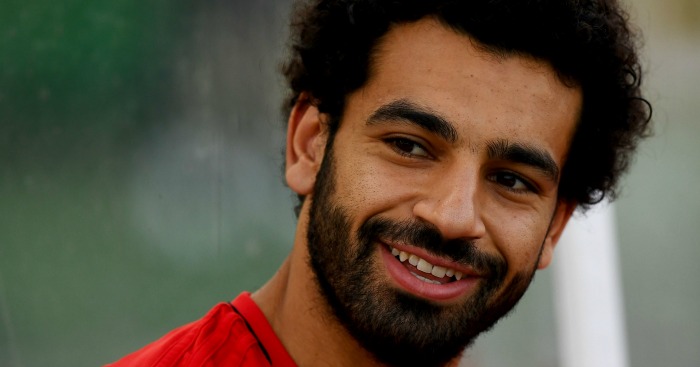 REAL MADRID TO TEST THE WATER ON SALAH
It was only a matter of time before super clubs were linked with a move for Mohamed Salah. His form has been so astonishing since joining Liverpool for a relatively small fee that his name will soon become a staple of gossip columns.

Don Balon are the first to shoot, claiming that Real Madrid are preparing a player-plus-cash deal for Salah that includes Lucas Vazquez.

Given that the report mentions no price, no timescale and no indication that Liverpool would do anything but respond with a message telling Real to ‘knob off’, we’ll take it with a pinch of salt. Still, Liverpool could probably do without a second key attacking player being targeted by a Spanish club.

CHELSEA WILL GO BACK IN FOR BARKLEY
Ross Barkley’s non-move to Chelsea was one of the stories of deadline day at the end of the summer transfer window. Barkley later claimed that he not done a medical, but instead arrived at Chelsea before changing his mind and choosing to stay with Everton. He hasn’t played all season due to injury.

That makes signing an unfit Barkley something of a risk, but the Daily Mail say that Chelsea will go back in for their man. It seems likely that the attacking midfielder will join one of Chelsea or Tottenham, just as it did in the summer.

Writing in the Mail, Matt Barlow says that Tottenham are still Barkley’s preferred club because he thinks he is more likely to get regular first-team football there. Yet Chelsea are acutely aware of the need to improve their squad in the January transfer window, and are unwilling to give up on Barkley.

ARSENAL AGREE DEAL FOR N’ZONZI
Now we don’t want to cast aspersions on Spanish news outlet El Gol, but we’ve literally never heard of them before and the first time we do hear their name it’s to claim a pretty sensational deal has already been done.

El Gol say that Arsenal have agreed a deal to sign Sevilla midfielder Steven N’Zonzi for £35.3m and that a move could happen in the January transfer window. If a deal has already been agreed, why wouldn’t he join in January?

Arsenal certainly need a central midfielder capable of giving added protection for a defence that has lost 11 of its last 20 away league games, but you have to doubt whether N’Zonzi would choose to leave Sevilla in January for a club in the Europa League when his own team face Manchester United in the Champions League last 16.

AND THE REST
Arsenal will launch a final attempt to re-sign Mesut Ozil…Crystal Palace are confident of agreeing a deal to sign Espanyol goalkeeper Diego Lopez…Swansea are stepping up their interest in Barnsley’s Andy Yiadom…Islam Slimani will quit Leicester in January…Liverpool striker Daniel Sturridge is open to the possibility of moving abroad in the January transfer window…Celtic boss Brendan Rodgers is targeting RB Leipzig centre-half Marvin Compper.