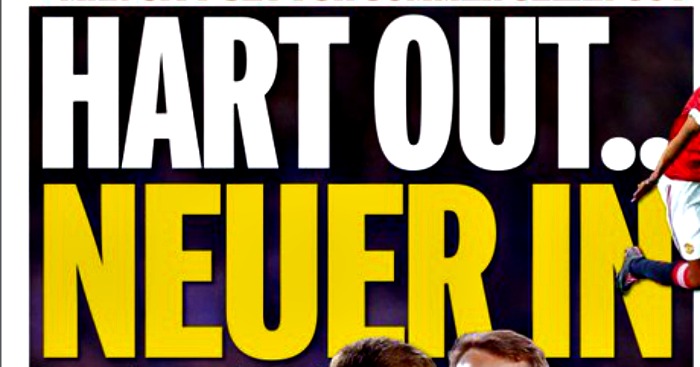 REAL-LY MENTAL
Thursday brought us news that Cristiano Ronaldo and Sergio Ramos wanted to leave Real Madrid. Friday brings us news that Real Madrid want to sell all of their players.

Well, nine of them. The claim comes from The Sun, who credit Spanish daily Sport with reports that Zinedine Zidane and club president Florentino Perez will oversee a summer ‘clear-out’ of their ‘underperforming’ players.

Not to say the claims from The Sun aren’t true, but there is no trace of the story from Sport. More amusing is the fact that The Sun explicitly states that Real are wanting to offload TEN – ooo look, it’s in bold capitals – players, then going on to name only nine. A round number is sexier, you see.

So, where are they off to? Unfortunately, The Sun don’t reveal much more. Ronaldo and Ramos are linked to Manchester United because obviously, while Arsenal, Chelsea and Manchester City all want Isco. Kroos ‘will not be short of takers across Europe’ apparently. Cheers for that one.

NEUER GONNA HAPPEN
‘HART OUT…NEUER IN’ screams the back-page exclusive from the Daily Mirror on Friday. Adrian Kajumba has the inside track.

Hold the damn phone. Pep Guardiola wants to sign the best goalkeeper in the world, the keeper at his current club, when he joins his new one in the summer? Stop the presses.

The claim appears to be built around the not-so-groundbreaking theory that Guardiola wants a ‘sweeper-keeper’. Why Bayern would sell their first-choice keeper, who is still only 29 and has three years left on his current contract, is not disclosed. Nor is why Neuer would leave the three-time consecutive Bundesliga winners and perennial Champions League semi-finalists for a club whose European prospects are uncertain next season.

‘If the Blues can’t land Neuer and Hart is unable to convince Guardiola he has what it takes to play as required, the former Barca boss is prepared to look elsewhere.’ If and if and if. Less ‘HART OUT…NEUER IN’, more ‘club wants best goalkeeper in the world but he probably won’t join’.

THE PULL OF PEP
Ilkay Gundogan is in a seemingly permanent state of being ‘set to leave’ Borussia Dortmund. Manchester United were perennially linked to the midfielder years ago, while Liverpool have also been credited with a long-term interest. Now it’s Arsenal and Manchester City’s turn.

The Daily Mail tells us that Gundogan has rejected a new contract extension at Dortmund, and City have emerged as his ‘favoured choice’. The German has one year remaining on his current contract, and the Bundesliga side have said they wish to have an answer on his future by the end of March. The pull of Pep appears to be swaying Gundogan towards City, says Simon Jones.

If the midfielder refuses to sign a new deal, Dortmund will look to sell him in the summer instead of losing him for free next year, Jones adds.

AND THE REST
Manuel Pellegrini has been offered the Zenit St Petersburg job when he leaves Manchester City but he has still not ruled out staying in England with Newcastle emerging as a surprise contender for his signature…Chelsea reportedly sent scouts to watch Juventus midfielder Paul Pogba, 22, for the second leg of the Coppa Italia semi-final against Inter Milan…Turkish side Galatasaray have denied they have received an offer from Tottenham for 29-year-old Uruguay goalkeeper Fernando Muslera…Chelsea and Manchester United have been linked with AC Milan striker Carlos Bacca, 29, but the Colombia international’s agent says he is happy in Italy…Neymar has emphatically dismissed any chance of a future move to Manchester City – declaring he even prefers Real Madrid over them…Manchester United’s Uruguayan defender Guillermo Varela says he asked to leave the club in January but the 22-year-old was asked to stay by manager Louis van Gaal…Italy are considering a shock move to make Claudio Ranieri their new coach after Euro 2016.