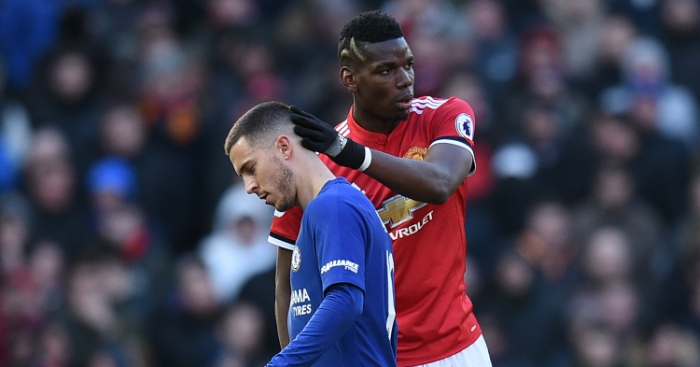 MAD ED ‘N POG RAID
We have literally no choice but to keep The Sun’s headline on this story because they finally appear to have entirely given up on the concept of words altogether.

Obviously, you’ve already pieced together the entire story – all the information is there – but we’ve got a bit of space to fill so might as well translate that headline into English.

RAID = An attempt to complete the transfers of the aforementioned footballers.

Madrid’s interest in the pair is nothing new, of course, but they have now STEPPED UP their efforts to complete the DREAM DOUBLE SWOOP. They’re going to wave £85million under Chelsea’s noses, while “sources in Spain” say Pogba would consider a move to Madrid. There won’t be much change from £200m for the pair.

UNITED’S £250m SHOPPING SPREE
Manchester United’s limp Champions League exit at the hands of Barcelona will spark a £250m shopping spree this summer reckon the Mirror. Ole Gunnar Solskjaer wants at least four new signings in the summer, with that £250m figure arrived at via the following maths:

Celta Vigo striker and one-time West Ham target Maxi Gomez is on Spurs’ radar according to the Mirror; he has a £42m buyout clause that drops to just £22m if Celta – currently fourth bottom in La Liga – are relegated. He’s no Fernando Llorente, surely.

Lazio defender Luiz Felipe is also on the shopping list given that Toby Alderweireld is finally set to actually leave this summer. That’ll be another £18m-£20m shelled out.

The Daily Star still reckon Spurs have some chance of signing De Ligt from Champions League semi-final opponents Ajax, which is just darling.

AND THE REST:
Arsenal target Joan Jordan could be available for £12m in the summer because of his Eibar release clause… Brighton boss Chris Hughton is fighting for his job even if the Seagulls avoid relegation… Olivier Giroud will reject a 12-month contract extension at Chelsea… Marcus Rashford is still stalling over a new Manchester United contract… Arsenal scouts have been watching Ajax’s David Neres… Newcastle are considering a Ryan Fraser-Matt Ritchie swapsie with Bournemouth… Bayern Munich are ready to send Renato Sanches out on loan again.