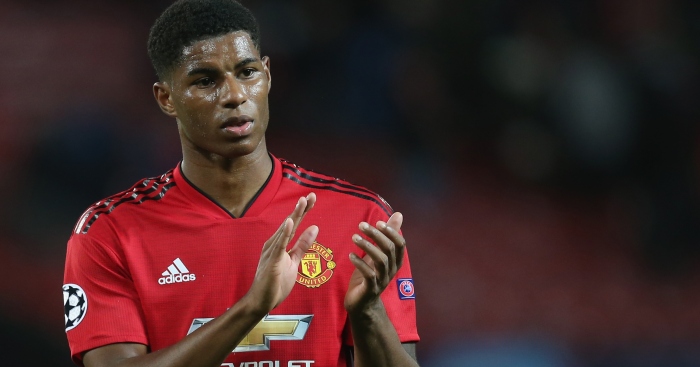 RASHFORD IN REAL DEMAND
Marcus Rashford may be struggling to nail down a place in Manchester United’s XI but that doesn’t mean the forward isn’t wanted by Europe’s biggest hitters.

According to The Times, Juventus are doing their homework by compiling a dossier and ‘making discreet checks on the player’s background and character’. Not discreet enough, seemingly.

The Old Lady is not alone in sniffing around Rashford. Real Madrid are also said to be interested in the 21-year-old.

The Sun reckons Real watched Rashford impress for England on Sunday and they believe he can fill the void left by Cristiano Ronaldo. They are also making plans to replace Luka Modric, with Christian Eriksen said to be their primary target.

Real are apparently pondering a £50million offer for Rashford, who is under contract at United until 2020, though the club have the option to extend that for another year. Eriksen has a season and a half remaining on his Spurs deal and Real reckon a £40million offer could do the trick.

According to The Sun, Unai Emery is willing to pay the  £17.8million it would take to activate the release  clause in Pablo Fornal’s Villarreal contract.

The 22-year-old came off the bench on Sunday to earn his second international cap and the attacking midfielder has been a key figure for Villarreal, despite their struggles in La Liga.

To fund the move for the Spain international, Emery will sell Mohamed Elneny, who has yet to make a Premier League appearance this season. Which seems like pretty decent business to us.

According to Bild, Bayern Munich and Barcelona are among the visitors to Frankfurt to watch Jovic, who was second on our list of Europe’s most productive young attackers, having contributed to a goal every 47 minutes this season.

The report also states Liverpool are sniffing, though that link seems to originate from an independent Liverpool website, so treat that link with the scepticism it deserves.

Jovic being the modest chap he appears to be, will doubtless take it all in his stride: “I just have to continue as before. I think I’ll have a brilliant career ahead of me.”

AND THE REST
Besiktas want Javier Hernandez in January…Christian Pulisic will move to the Premier League but not until the summer… AC Milan could make a move for Gary Cahill… Barcelona have watched Genoa striker Krzysztof Piatek and Lille forward Nicolas Pepe… Barca have given Ousmane Dembele an ultimatum to either change his lifestyle or leave the club… Manchester United have made an offer of £80m for Napoli central defender Kalidou Koulibaly.