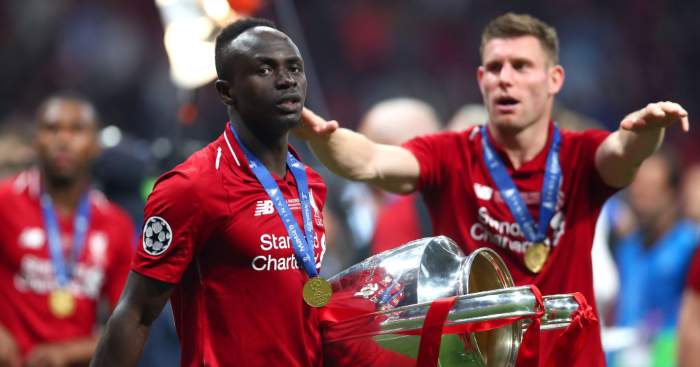 Despite claiming he is happy playing for a Liverpool side who “beat big teams,” Sadio Mane is still being linked with a move to Real Madrid.

The Senegal international has been a reported target for Zinedine Zidane’s rebuilding project at the Bernabeu for some time and now the Sunday Express has an update for us. They claim the Reds have a chance to sign Marco Asensio this summer but there is ‘one catch’. Mane has to come the other way in a swap deal for the Spain international.

Real know Jurgen Klopp is a ‘big fan’ of Asensio and they plan to use the midfielder ‘as bait to land Mane’ from Liverpool. There isn’t too much more to the report apart from claiming any exit for Mane could ‘open the door’ for Nicolas Pepe to move to Anfield from Lille.

SENDING OUT A WARNING

There have been rumours going round that it would cost Arsenal £80million to buy Wilfried Zaha from Crystal Palace, which was bad enough considering the Gunners’ summer budget is understood to be around £45million. And now a report in the Mail on Sunday claims that the Eagles have slapped a £100million price tag on Zaha after losing Aaron Wan-Bissaka to Manchester United already this summer.

Zaha has emerged as one of Arsenal’s main targets in this transfer window as they look to stretch a reported £45million budget well beyond comprehension. In a previous report in the same newspaper, the Ivory Coast international was understood to have ‘pleaded’ with Palace to sanction a move to his boyhood club.

However, they will now demand £100million as they are ‘worried about a backlash’ from supporters and manager Roy Hodgson. The Mail on Sunday adds that there is ‘no buy-out clause’ in Zaha’s contract and that even if Arsenal sold Pierre-Emerick Aubameyang, they still wouldn’t be able to raise the funds for a deal of that magnitude.

Meanwhile, The Sun adds that ‘chairman Steve Parish fears selling Zaha could wreck his plans of finding new partners who share his long-term vision’ for Palace. In short, the 26-year-old is going nowhere fast.

Liverpool, Manchester United and Arsenal are interested in Borussia Dortmund forward Jacob Bruun Larsen…Tottenham chairman Daniel Levy has phoned Real Madrid to offer them 27-year-old Denmark playmaker Christian Eriksen…Kylian Mbappe has no intention of extending his deal at Paris Saint-Germain, which expires in three years time…Paul Pogba will hold talks with Ole Gunnar Solskjaer next week, as he looks to negotiate an exit from Manchester United…Birmingham City forward Che Adams has said goodbye to team-mates ahead of a £16million move to Southampton…Inter Milan will sell Joao Mario and Dalbert to raise enough funds to buy Romelu Lukaku from Manchester United…Watford have reached an agreement to sign England defender Craig Dawson from West Brom for £5.5m…Leeds United are close to completing a loan deal for Wolves’ 25-year-old Portugal winger Helder Costa…Italian champions Juventus have agreed personal terms with PSG midfielder Adrien Rabiot.