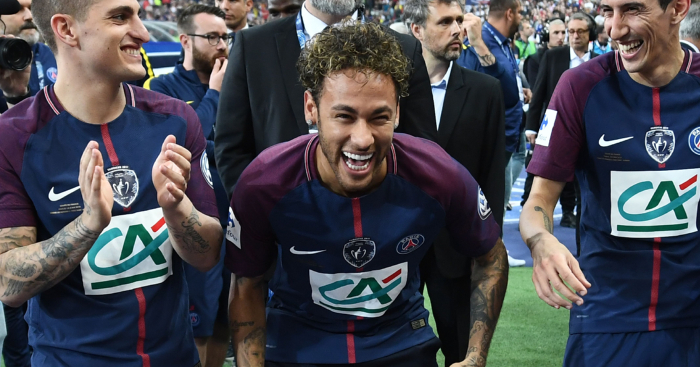 REAL TO BREAK RECORD BY £107M
Real Madrid are supposedly willing to pay all the money to Real Madrid to secure Neymar this summer.

There’s nothing new in Real’s desire to sign the Brazil star from PSG but The Sun claims to have been told by ‘a source close to Madrid’ that the La Liga giants are so desperate to make an impression on the market that they will pay £307million before the start of the new season, despite a clause in Neymar’s PSG contract that mean he can leave for £263million after this summer’s window closes.

That clause was inserted to ensure that Neymar stayed at PSG for at least 18 months after moving from Barcelona for £198million a year ago. But, with big changes expected at the Bernabeu, Real are happy to break the transfer record by £109million to sign the 26-year-old.

Real are also expected to reignite their interest in David De Gea, according to Sky Sports. The potential consequences of that were covered yesterday.

HAMMERS’ DOUBLE BID REBUFFED
Among other things, West Ham need a goalkeeper and a centre-back this summer. Apparently, they’ve tried – and failed – to get both from Swansea.

Sky Sports claims the Hammers have had bids rejected for Lukasz Fabianski and Alfie Mawson. Both look likely to leave the Liberty Stadium this summer, but Swansea are keen to at least offer the impression they won’t be taken for mugs.

Fabianski, 33, has a year left on his contract but Swansea’s bargaining position is stronger over Mawson, who could fetch in excess of £20million.

West Ham may also be in the market for a playmaker after Friday’s news from Argentina.

AND THE REST
Liverpool’s move for Nabil Fekir is in doubt because the Reds have hesitated on concluding the £53m deal following the 24-year-old’s medical…Athletic Bilbao are prepared to make Manchester United midfielder Ander Herrera their highest-paid player…Chelsea owner Roman Abramovich has rejected an approach from Jim Ratcliffe – Britain’s richest person – to buy the Premier League club…Arsenal have agreed a deal to sign defender Sokratis Papastathopoulos for £16million from Borussia Dortmund…Dele Alli and Christian Eriksen are set to follow Harry Kane by signing new Tottenham contracts…Wayne Rooney made a trip to the United States consulate in Belfast as part of his visa application process to join DC United…Crystal Palace are considering a move for Celtic midfielder Stuart Armstrong…Chelsea boss Antonio Conte has emerged as Real Madrid’s prime target to succeed Zinedine Zidane…Wolves are set to sign Sporting Lisbon keeper Rui Patricio on a free…Leeds United have asked whether Steve Bruce is interested in moving from Aston Villa…Nottingham Forest are close to signing Benfica forward Diogo Goncalves and midfielder Joao Carvalho.