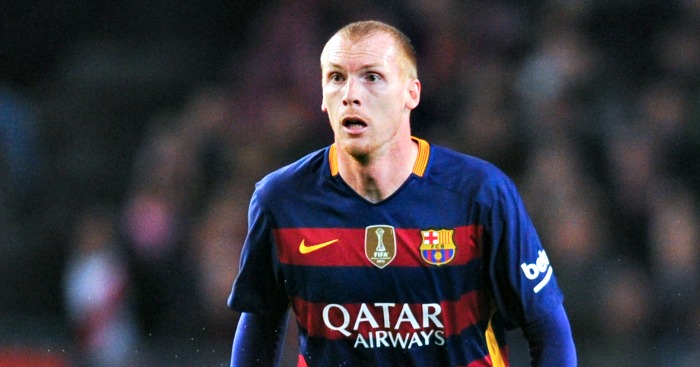 CASE FOR THE DEFENCE
With the revelation of another injury setback for Joe Gomez came news of Liverpool’s imminent search for a new centre-half. The former Charlton man and Mamadou Sakho are now sidelined, leaving Joel Matip, Dejan Lovren, Tiago Ilori, Andre Wisdom and Emre Can as cover at centre-half, as well as the ghost of Martin Skrtel.

So who do the Reds turn to? According to reports, they have set their sights on an experienced head in Spain. An experienced head playing for Barcelona, no less. The club have ‘made contact’ with Jeremy Mathieu.

French newspaper Le Parisien claims that Jurgen Klopp has identified the 32-year-old as a ‘short-term option’, although the defender already has an offer on the table from Besiktas.

But Mathieu, who was part of France’s Euro 2016 squad and would add realms of experience at Anfield, ‘would favour’ a Premier League move, and provides cover not only at centre-half, but at left-back.

WHY? KOS
Not got your fill of transfer rumours about 30-something French centre-halves yet? Well you’re in luck, because Bayern Munich want Laurent Koscielny.

Arsenal have opened talks over a new contract with the 30-year-old, and although they have offered £90,000 a week to the first teamer, negotiations have stalled.

Bayern are thought to be monitoring the situation. Carlo Ancelotti believes Koscielny could provide excellent back-up to Jerome Boateng and Mats Hummels. Could the temptation of winning an actual league title outweigh the desire to play regular football?

AB FAB
It’s a very defence-heavy gossip on Sunday morning, and Manchester United complete the set; they are after a new right-back.

According to The Sun, Jose Mourinho is eyeing a £22m move for Monaco full-back Fabinho. As you have already guessed, the two share an agent in Jorge Mendes, and so the link is a predictable one.

The Brazilian is 22, and has impressed in Ligue Un over the past few seasons. He’s not Matteo Darmian.

AND THE REST
Juventus are ready to raid Chelsea’s Nemanja Matic if Paul Pogba completes his world-record move to Manchester United…Liverpool and Arsenal are interested in Croatia international Marcelo Brozovic, according to reports in Italy…Five Manchester United players are set for crunch talks with Jose Mourinho – one of them is Juan Mata…Mata is being chased by Espanyol…West Ham striker Diafra Sakho, 26, has refused to travel with the team to their Austria training camp as the Senegal player looks to push through a move away…Swansea have entered the race to sign West Ham forward Enner Valencia…Liverpool are looking to keep full-back Jon Flanagan, 23, despite the player being linked with a loan move to Brendan Rodgers’ Celtic…Hull are favourites to sign Wales striker Hal Robson-Kanu, 27, on a free transfer after offering the former Reading player a four-year deal…Inter Milan are set to snatch Belgium midfielder Axel Witsel from under the noses of Everton and Leicester…Championship sides Norwich and Newcastle are competing to sign Blackburn and Scotland centre-back Grant Hanley, 24, with the Ewood Park club wanting £6m for the Scotland international…Arsenal and Chelsea have been told they must pay almost £38m for Roma defender Kostas Manolas.