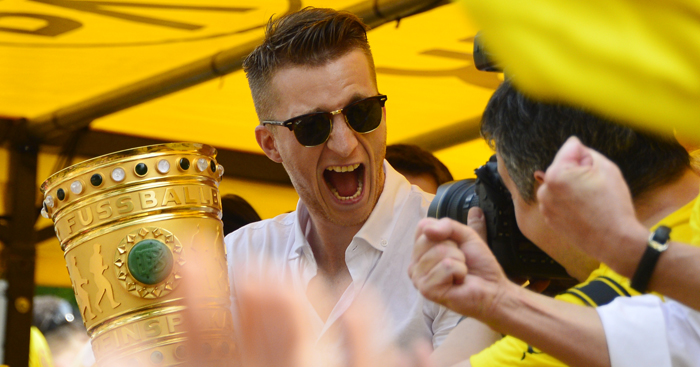 MANCHESTER UNITED AND ARSENAL WANT REUS
Yeah, we’re struggling to get on board with this. All that has happened is that Borussia Dortmund sporting director has announced that he thinks Marco Reus will stay at the club, telling Kicker: “We see Marco with us in the long run.”

Because news like that doesn’t sell very well on its own, The Sun included a line in their story that said ‘Both United and Arsenal have been monitoring Reus for months’. Reus hasn’t played for Dortmund since May, so it’s been a fairly easy monitoring job.

That then allows them to sell the story as ‘Manchester United transfer news: Borussia Dortmund expect Marco Reus to snub Red Devils and Arsenal and sign new deal’. Clever.

By the time that hits the Daily Star, it has grown again. ‘Man Utd and Arsenal keen on Marco Reus while Dortmund eye long-term stay,’ is there headline, flipping the sell on the story.

It isn’t going to happen.

LIVERPOOL TO RESIST MILNER BIDS
With James Milner not wanting to play at left-back and Liverpool having a large collection of central midfielders, you might have thought that the former England international might be leaving Anfield in the near future. Well then you’d be wrong, buster.

According to Chris Bascombe, the Daily Telegraph’s man on Merseyside, Liverpool will reject all bids for Milner in January because Jurgen Klopp wants to keep him as part of his plans. Milner is apparently frustrated at his lack of Premier League starts, but hopes to push for a starting place in central midfield. He was excellent against Maribor on Tuesday.

LOTS OF CONTRACT STUFF FROM OLD TRAFFORD
There are two main segments to this one:

– In the Daily Telegraph, James Ducker writes that Manchester United will trigger their option to extend Ander Herrera’s contract by a further 12 months if talks over a longer deal do not progress soon. That seems completely logical.

They also say that they remain hopeful of keeping Marouane Fellaini, who is out of contract next summer. Fellaini’s increased importance to United makes him more likely to stay, but he has reportedly rejected their opening offer. The thing is, Fellaini turns 30 next month, so a big (or long) contract would seem foolish.

– In The Sun, online gubbins expert Daniel Cutts writes that United will hand new contracts to a number of first-team players. Herrera and Fellaini are included, but so too are Juan Mata and Phil Jones. It describes how Jones has enjoyed a ‘stunning start to the season, which has seen him come in from the cold’. He did start 15 league games between December and May too. It’s more that he’s come in from the medical room than cold.