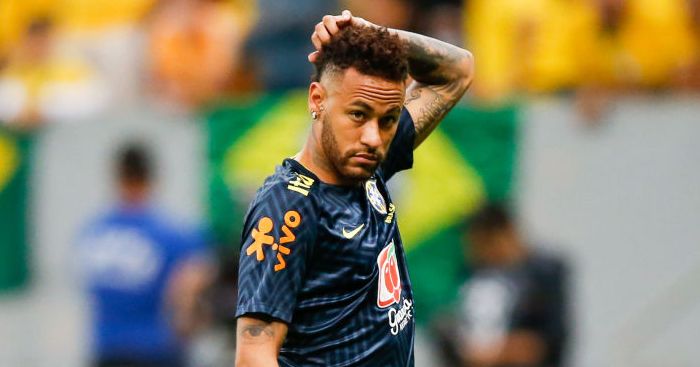 AN ARROW TO THE NEY
Wednesday starts with ESPN FC’s claim that Neymar‘s return to Barcelona “could be doable, but it won’t be simple,” according to a source. PSG are ‘open’ to selling the Brazilian, but are yet to receive a formal offer.

The same source suggests the French club ‘expects an offer’ from one of three clubs: Barcelona, Real Madrid and Manchester United. The former of the three want him because there is a ‘desire to have him back in the dressing room’, while Ed Woodward has fantasised over him for years.

Real needs no explanation. And Marca are here to tell us that while PSG ‘will not accept an offer worth less than’ the £200m they signed him for, there is a way ‘to reduce the price of the operation’. Zinedine Zidane’s side will propose a part-exchange including midfielder Casemiro, who will be surplus to requirements if and when Paul Pogba joins.

MESSI BUSINESS
But Real will face competition from Barca, with Lionel Messi apparently ‘demanding’ his former teammate’s return. Spanish publication El Mundo claim they are ‘studying how to transfer to PSG the private agreement that arrived with Griezmann last March’ to try and assuage the Neymar deal.

Basically, Barca are wondering whether they can essentially sell the pre-contract they have with Griezmann, which will activate on July 1 when his price lowers, to PSG in a quite bizarre part-exchange for Neymar. Griezmann would get a considerably higher wage in France, but would have to decide whether or not he wishes to give up on his Barca dream.

El Mundo adds that there are ‘endless complications’. Too f***ing right.

GLOBO WARMING
And then Kaveh Solhekol comes storming in with the following:

It comes from a Globo Esporte story, which says ‘the negotiation is well underway’ between PSG and Barca. The claim that they will ‘give away a few players’ – Samuel Umtiti, Ousmane Dembele and Ivan Rakitic are indeed those named – and €100m (£89.1m) is brought up in the second paragraph and never again. We are absolutely convinced.

RETURN OF THE MC
But enough about that charlatan. Let’s talk about a genuine footballing icon, a player that transcends the sport and time itself. One whose talent will endure generations, his name spoken with sheer joy and wonder even when the robots rise up to usurp the human race and drive us to the point of extinction.

“Tell us about his solitary England cap as a half-time substitute in a 3-0 win against the United States in November 2018,” the children will say. “Regale us with the legend of his loan spell at Yeovil in the 2009/10 season,” they will add, tears gathering in their glistening eyes.

Then comes the final request through stifled laughter and reminiscence over a much simpler time: “Remind us how the London Evening Standard said that a keeper who fell behind even Fraser Forster in the goalkeeping pecking order at Southampton at the end of the 2018/19 season would be ‘open’ to joining European champions Liverpool.”

How surprising that Alex McCarthy would quite like to join Liverpool. We are reeling from that news.

AND THE REST
Real Madrid are preparing a bid for 27-year-old Tottenham and Denmark playmaker Christian Eriksen. The Spanish giants will offer Spurs £45m plus Spain midfielder Dani Ceballos, 22… Spurs have been offered the chance to sign Sampdoria defender Joachim Andersen for £31.2m after Arsenal decided not to follow up their interest in the 23-year-old Denmark international… Manchester United’s Paul Pogba, 26, will receive a £3.78m loyalty bonus from the club on 1 July, despite the France midfielder saying it “could be a good time to move elsewhere”… Everton are close to finalising a deal to sign Portugal midfielder Andre Gomes, 25, from Barcelona for £22m… Manchester United striker Romelu Lukaku’s move to Inter Milan could depend on whether a deal for the 26-year-old Belgian that involves Argentina international Mauro Icardi, 26, moving the other way can be agreed. If not, Inter need to sell Icardi before signing another forward… Burnley have rejected a loan offer from Besiktas for English defender Ben Gibson, 26… Watford have approached PSV Eindhoven about signing 24-year-old Uruguay midfielder Gaston Pereiro… Southampton are set to beat Sheffield United and Burnley to the £14m signing of 22-year-old English striker Che Adams from Birmingham.