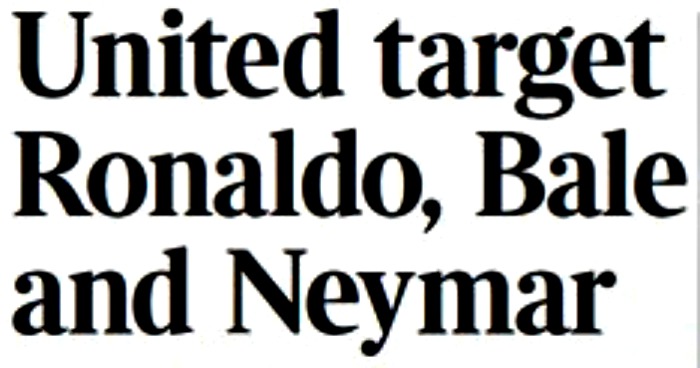 MANCHESTER UNITED WANT EVERYONE
The Times have a whopping great EXCLUSIVE to greet us on Friday morning. According to James Ducker, Manchester United ‘are working on separate deals’ for Cristiano Ronaldo, Neymar and Gareth Bale. And Diego Maradona. And Pele.

Ducker reports that United ‘have put considerable groundwork in on all three in the hope of landing one’, while Robert Lewandowski and Harry Kane also continue to be monitored.

The club have reservations over landing any of the three La Liga stars however, with Ducker adding that United fear the competitive, ‘more intense’ nature of the Premier League could be seen as a negative by Ronaldo or Bale – who have no prior experience in England, or Neymar, whose back literally broke after carrying his country to a World Cup semi-final.

With news that Manchester United are targeting the world’s very best players, it’s quite easy to forget they exited the Champions League at the group stage in midweek. Ed Woodward’s distraction techniques aren’t transparent at all. And this comes after the club’s spectacular ‘we didn’t fancy her anyway‘ on Thursday.

RYAN UP FOR SWANSEA GIG
While it’s pretty much common knowledge that Ryan Giggs is being groomed to replace Louis van Gaal at Manchester United upon the Dutchman’s departure, the Independent have thrown a curveball; Swansea have approached the Welshman over their vacant managerial position.

In an exclusive from Mark Ogden, it is reported that Swansea chairman Huw Jenkins is keen to explore every possible avenue with regards to Garry Monk’s replacement, and that the club ‘are understood to be ready to speak to Giggs’.

Much will depend on Giggs’ future with Manchester United, Ogden adds, with Louis van Gaal possibly extending his current stay beyond his planned exit in 2017. With Carlo Ancelotti also linked with the post and Gary Neville beginning his managerial career over at Valencia, a lack of experience could stand against Giggs if the position becomes vacant.

According to Ogden, Giggs fits Jenkins’ bill of an ’emerging coach’ who ‘favours attacking football’. That rules out Avram Grant, who had recently been linked with the role, while Chris Coleman and Brendan Rodgers have pulled out of the running themselves.

Ogden makes no secret of the fact this is by no means set in stone – ‘Swansea are determined to investigate every possible option,’ he writes – but it would represent an interesting option for Giggs.

MONEY MIGHT BUY YOU STONES
John Stones is going to be hot property in the summer. It’s hardly an outlandish prediction, but reports that Manchester United are willing to offer £50million for him in the summer confirm the Everton defender is still a very much wanted commodity.

The exclusive claim comes from the Daily Star, who say that Stones is United’s ‘number one transfer target’ for next summer. Their only mention of a £50million bid comes in the standfirst, with every other mention being of a ‘record-breaking bid’ or ‘huge offer’.

The Star adds that Chelsea will renew their interest in Stones after failing to land him last summer, but with them likely to miss out on the Champions League this season, United are in pole position for the Everton centre-half.

ARSENAL TARGET WANYAMA
Arsenal suffer a lot of injuries. Such news may shock you, but it’s true, particularly in midfield. Santi Cazorla, Francis Coquelin, Jack Wilshere and Tomas Rosicky are all currently sidelined through injury, and while the absence of Mikel Arteta represents a much-needed boost for the Gunners, they will surely look to strengthen in January. Surely?

This is where Arsenal superfan John Cross comes in. The Daily Mirror’s main man reports that Arsenal will make Southampton midfielder Victor Wanyama their ‘No 1 priority’ come next month. Wanyama almost joined Tottenham earlier in the year – something he is keen to erase from history – but Cross says Arsenal ‘have the funds’ that could persuade Saints, who rejected a £12million bid for the Kenyan from Spurs in the summer.

Wanyama, 24, joined Southampton for £12.5million from Celtic in 2013, and so Cross adds that the Gunners will require an offer of at least more than £15million, which seems fair. Kim Kallstrom would be considerably cheaper, mind you.

AND THE REST
Wayne Rooney is being offered an eye-watering £75m deal to be reunited with Sven Goran Eriksson at Chinese Super League club Shanghai SIPG…Real Madrid want to take Jose Mourinho back to the Bernabeu next summer…Remi Garde has confirmed an interest in signing Ashley Cole to help Aston Villa’s survival bid…Swansea are considering a move for Ostersund’s English manager Graham Potter, who has won a third promotion in five years with the Swedish club…Diego Costa has dropped a big hint he is ready to quit Chelsea and return to Atletico Madrid…Manchester United sent scouts to watch Anderlecht’s midfield prodigy Youri Tielemans, who was also watched by representatives from Everton and Aston Villa.