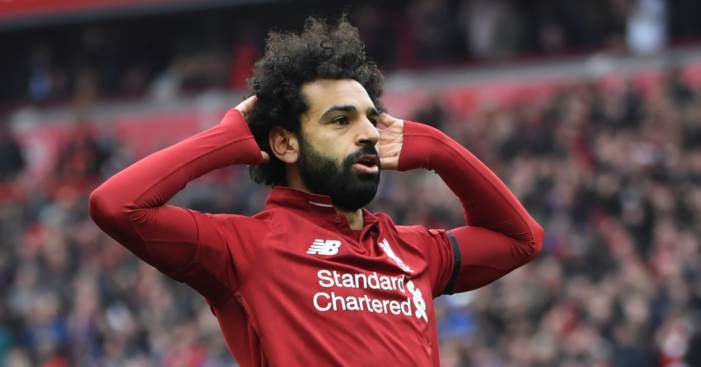 QUE SALAH, SALAH
The relatively recent advent of transfer stories that suggest players have ‘demanded’ or ‘ordered’ their clubs to sign certain players is weird. Are we supposed to expect that Lionel Messi has barged into Josep Maria Bartomeu’s office and threatened to quit unless he makes £200m worth of signings? Or that Neymar has delivered an ultimatum to the state of Qatar over their decision not to spend £600m?

The idea of Cristiano Ronaldo dictating to Juventus is a little more palatable, and Italian newspaper Gazzetta say he ‘expects’ Juventus to invest this summer to deliver another Champions League title.

But Juve have a problem: they will have to ‘jump through hoops’ to avoid a ‘red balance sheet,’ so must make ‘profitable changes’. One of which would be to ‘give up Paulo Dybala’ to tempt Liverpool into letting Mo Salah leave.

It was suggested that Salah had requested that Liverpool let him leave this summer, but his agent has already denied those claims. And this Gazzetta story hardly seems watertight, considering the Egyptian’s value to Liverpool far outweighs that of Dybala’s to Juventus.

Salah has a longer contract at Anfield than Dybala does at Juventus, is more important to the club, has a far greater chance of European honours and seems happier where he is. Not. Gonna. Happen.

SPURRED ON
Liverpool made Peter Crouch their most expensive signing in the summer after becoming European champions. So how will Tottenham deal with winning the Champions League?

The Daily Mail say they will ‘spend up to £150million’ to renovate and revamp Mauricio Pochettino’s squad. The manager ‘is already planning significant changes,’ and it does not require a degree in rocket science as to where.

Lucas Moura was the club’s last signing back in January 2018, but Pochettino ‘wants up to five new players’. He has a starting budget of just £60m, but will look to almost triple that through player sales.

Tottenham will ‘listen to offers’ for Danny Rose, Victor Wanyama and Georges-Kevin Nkoudou, while the futures of Kieran Trippier, Christian Eriksen and Toby Alderweireld are ‘unclear’. Fernando Llorente will also be let go when his contract expires at the end of the season.

‘They want two new central midfielders and more creativity in the forward line, given Eriksen’s likely exit,’ the article says, adding that they also want a left-back, a support striker and a central defender. So nothing major.

HAZARD WARNING
But how will Chelsea deal with their Europa League final defeat to Arsenal, thus setting up a north London Super Cup derby? They will apparently sell Eden Hazard to Real Madrid, with that deal announced ‘in the coming days’.

Quite why Chelsea would agree to make that deal official while their Premier and Europa League campaigns hang in the balance is uncertain. But Marca are adamant that Hazard will leave for ‘a fee close to €100m’. Chelsea wanted double that amount, but ‘the relationship between the two clubs is now excellent due to Mateo Kovacic’s loan move’.

You’d think Chelsea would harbour a grudge against Real for loaning them a midfielder with no discernible talents. But yeah.

AND THE REST
Chelsea have lowered their asking price for Eden Hazard, as they eye Lille’s Ivory Coast forward Nicolas Pepe, 23, to replace him… Real Madrid manager Zinedine Zidane will have 500m euros (£430m) to spend in the summer with Manchester United’s France midfielder Paul Pogba, 26, and Liverpool and Senegal striker Sadio Mane, 27, both transfer targets… Newcastle will offer manager Rafael Benitez a £50m summer transfer budget in a bid to persuade the Spaniard to stay at St James’ Park… Alternatively, Benitez has been offered a £100m transfer budget, plus cash from player sales, to rebuild the Magpies.. Arsenal are interested in signing 25-year-old Hoffenheim and Germany forward Kerem Demirbay for £22m as a replacement for departing Wales midfielder Aaron Ramsey… Napoli’s 27-year-old Senegal centre-back Kalidou Koulibaly has denied he is set to leave the Serie A side for Manchester United.