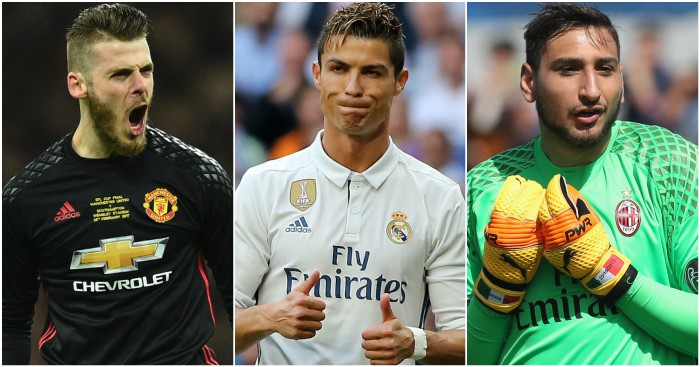 SEE YA, CR7
Momentum is certainly building behind reports Cristiano Ronaldo wants to leave Real Madrid, with one report from AS claiming the Portugal superstar told his agent Jorge Mendes two months ago that he wanted to quit.

While ABC suggests that Real Madrid have not been told by Ronaldo of his desire to quit, Portuguese publication Record says the 32-year-old is not planning to return to Spain after playing for the national team in the Confederations Cup in Russia.

The Daily Mail puts PSG at the head of the queue, not just because they are one of the few clubs who would be able to afford the obscene amount of money Real will demand, but Mendes is reported to have held talks with the Parisians before the Champions League final.

You would think that if Ronaldo does indeed want to quit, then Florentino Perez will make him kick up such a stink so as to make the player the villain of the piece in the eyes of supporters. And just imagine what that might look like…

Talk of David de Gea finally getting a move to Real Madrid seemed to have gone quiet over the last week or two, but Diario Gol suggests things are still bubbling under between the Champions League winners and the Manchester United keeper.

They claim De Gea is house-hunting in Madrid having put his home in the north-west up for sale.

De Gea’s path to Real could be smoothed by the sudden availability of AC Milan wonderkid Gianluigi Donnarumma.

The Italian keeper has been linked with Real and Manchester United seemingly since he was in the womb and if United can land the 18-year-old for a reasonable fee, it is suggested Jose Mourinho may be more willing to sell De Gea, especially if it helps his pursuit of Alvaro Marota.

United have also been told how much it will cost them to get their hands on Eric Dier – and, unsurprisingly, it is more than they expected to pay.

The Telegraph reports Spurs have informed the Red Devils that it will take £50million to prise the England international away. Given they supposedly wanted £60million for Kyle Walker a week ago, that doesn’t seem too unreasonable.

Mourinho has told Ed Woodward which players he wants and Dier is supposedly among the names at the top of that list – at least, it was before Dier’s performances for England over the last week. The 23-year-old, who is keen to focus on playing in midfield, is said to be seen as a long-term replacement for Michael Carrick, and he knows he could at least double his current £70,000-a-week wage packet.

AND THE REST
Arsenal are reportedly set to offer a second world-record bid of more than £100m AND Olivier Giroud for Monaco’s Kylian Mbappe…Carlos Tevez admits he could quit the Chinese Super League just six months after signing a world-record £615,000-a-week contract…Real Sociedad have confirmed their interest in snapping up Adnan Januzaj…Lyon president Jean-Michel Aulas has confirmed that he has held advanced talks with Chelsea regarding the possible signing of Bertrand Traore…Tottenham are the latest club to enter the race for Lazio winger Keita Balde…Borussia Dortmund’s Ousmane Dembele has fueled Manchester United transfer rumours by liking a tweet that confirmed Victor Lindelof’s transfer to United…Manchester United legend Ryan Giggs is hoping to kick-start his managerial career with Southampton…Hull are trying to hijack Newcastle’s bid to borrow Chelsea youngster Tammy Abraham…

Chelsea have no intention of allowing Antonio Conte to leave Stamford Bridge – and will back him with a £250m spending spree to prove it…The Blues are set to announce the arrival of their first summer signing on July 1 when former Manchester City goalkeeper Willy Caballero arrives on a free transfer…Birmingham are waiting to hear from John Terry after offering him a stunning deal to become their best-paid player ever…Virgil van Dijk looks set to stay at Southampton after taking centre stage in the club’s new kit launch campaign…West Ham are in pole position to land Sunderland defender Lamine Kone…Arsenal forward Lucas Perez is a summer target for Sevilla and Deportivo La Coruna, according to the player’s agent…Crystal Palace are in the hunt for £8m Senegalese midfielder Badou Ndiaye, who plays for Osmanlıspor in Turkey…

Goalkeeper Eldin Jakupovic is set to follow Harry Maguire from Hull to Leicester in a £2m move…Waford boss Marco Silva has failed with an £8m move for Angers attacker Nicolas Pepe…Manchester United are to sign £44m Inter Milan winger Ivan Perisic within weeks…Arsenal are beginning to firm up their interest in Juventus midfielder Mario Lemina…Former AC Milan boss Alberto Zaccheroni has thrown his hat into the ring for the jobs at Crystal Palace and Southampton…Michy Batshuayi will reportedly reject any immediate approach from West Ham as he looks to discuss his Chelsea future…Newcastle manager Rafa Benitez reportedly wants to sign Liverpool midfielder Lucas Leiva this summer…Frank de Boer, the bookmakers’ favourite for the Southampton job, is not understood to be in contention to replace Claude Puel…Stoke City’s chief executive has denied outright that the club is interested in signing Manchester United captain Wayne Rooney… Former Arsenal and Manchester United striker Robin van Persie, 33, is close to leaving Fenerbahce and sealing a move back to Feyenoord in his native Netherlands…

West Ham are interested in signing Middlesbrough’s 21-year-old winger Adama Traore, but Boro do not need to raise money from sales…Bayern Munich attacking midfielder Douglas Costa, 26, is set for a £26m move to Juventus, where he has agreed a four-year deal…Arsenal are set to try to beat Everton to sign AC Milan forward M’Baye Niang, 22, who was on loan at Watford last season…Swansea remain in talks with Turkish side Galatasaray over the sale of striker Bafetimbi Gomis, 31, who spent last season on loan at French side Marseille…Hull and Newcastle are both keen to sign Chelsea’s 19-year-old striker Tammy Abraham on loan…Manchester City have given manager Pep Guardiola £300m for transfers this summer but refuse to spend £70m on Southampton centre-back Virgil van Dijk…Stoke are yet to receive any offers for Giannelli Imbula, a month after manager Mark Hughes said the 24-year-old midfielder, who was a club-record signing in February 2016, could leave this summer.