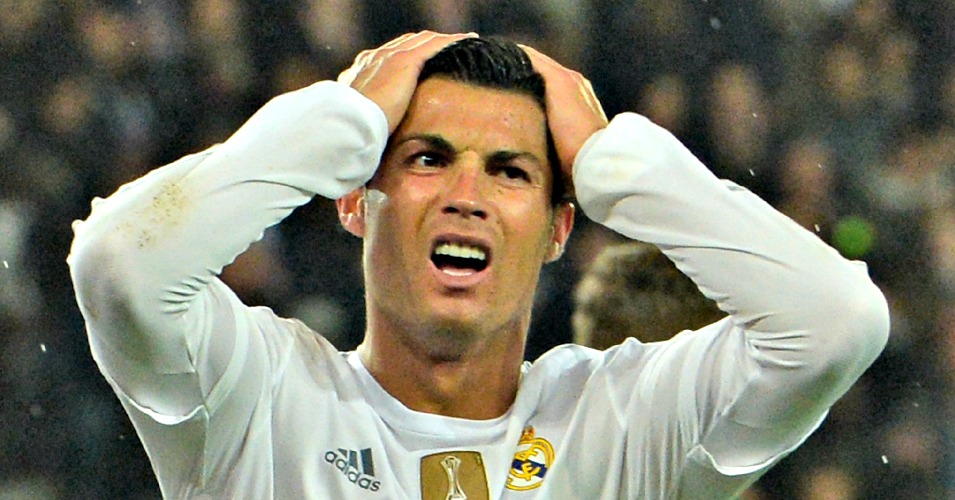 RONALDO ‘BLOW’ FOR UNITED
That’s right folks; Louis van Gaal will not have the opportunity to convert Cristiano Ronaldo into a right-wing back. He’s off to PSG.

So says Antony Kastrinakis of The Sun. Their European football correspondent believes Cristiano’s public shows of affection towards PSG boss Laurent Blanc and president Nasser El-Khelaifi after Real’s Champions League clash with the French champions point to a wider meaning.

Blanc would not reveal what Ronaldo whispered in his ear after Real’s victory on Tuesday but, according to Kastrinakis, Ronaldo’s ‘touchy-feely gestures’ towards his potential suitors ‘were designed to rile’ club president Florentino Perez.

Kastrinakis claims there are ‘strong rumours’ in the Spanish capital that a deal for Ronaldo to join PSG for £100million in the summer has already been agreed, thus ending any (ridiculous and tiresome) links with United.

For what it’s worth (which is remarkably little, for what that’s worth), Spanish football ‘expert’ Guillem Balague insists Ronaldo ‘still dreams of returning to Manchester United’.

LIVERPOOL CHASING KIESSLING
Over to Germany now, with reports emanating that Liverpool are interested in Bayer Leverkusen striker Stefan Kiessling.

The claim comes from German publication Express, who report that Klopp is a long-term fan of the forward and attempted to sign him while at Borussia Dortmund. Not only that, but Liverpool themselves apparently had an offer knocked back this summer.

Express say Kiessling is concerned about becoming a ‘B’ striker at Bayer behind Javier Hernandez and Admir Mehmedi. Considering he has featured in 11 Bundesliga games and Hernandez and Mehmedi have played in eight and 11 respectively, he shouldn’t be too worried. Kiessling has started eight of those to Hernandez’s six and Mehmedi’s five.

There is also the fact that Liverpool don’t need the 31-year-old. Fitness problems may have eviscerated much of their attack, but Christian Benteke looks great upon his return, Daniel Sturridge has another 10 games in him this season before his legs collapse, and Roberto Firmino is an able deputy if needed.

Spurs have been regularly linked with Depoitre this season, but it remains a bizarre rumour. He has scored seven goals in 15 appearances so far this season for the Belgian side, but the most he has ever scored in a single campaign is 16 in the Belgian second tier in 2012/13. He has 26 goals in 78 Belgian Pro League games overall, and at 26 he is hardly one for the future.

The link to Simon is one which appears more likely. The 20-year-old Nigerian was a target for Spurs and Liverpool not long ago according to Jones, and he seems to fit the Mauricio Pochettino profile. A pacey winger who can play across the front line, Simon has scored seven goals in 33 appearances since joining Gent last year. Plus his middle name is ‘Daddy-Ajala’. Sign him now, Poch.

AND THE REST
Jurgen Klopp will reassess Steven Gerrard’s playing situation if he makes an impression in training…Chelsea could sell Academy star Charly Musonda for in excess of £10million…Manchester United and Liverpool are ready to go head-to-head for Danish wonderkid Emre Mor…Andros Townsend believes his Tottenham career is effectively over after being exiled indefinitely from the first team…Liverpool have handed a trial to 15-year-old Belgian keeper Jonathan de Bie, who plays for Mechelen U19s…Bayern Munich are desperately trying to convince Pep Guardiola to sign a new contract.