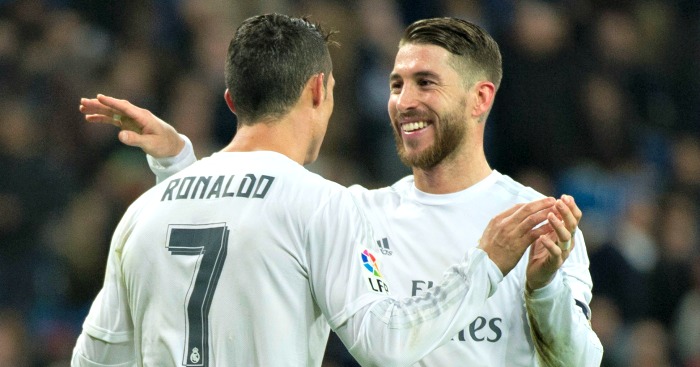 #MUFC on red alert as Ronaldo and Ramos hand in transfer requests at Real Madridhttps://t.co/NB1uazJJ0t pic.twitter.com/EKVZt1bZq6

The claim comes from Spanish daily Sport. They write that both players approached club president Florentino Perez in the aftermath of their derby defeat to Atletico Madrid at the weekend, asking to leave the club in the summer. They attribute the claims to Spanish television show El Chriniguito, who, according to most sources, are eminently (un)reliable.

The delightful Fichajes.net report that United are preparing a £115million bid for the pair, which is fun.

Ronaldo is 31, and has two years remaining on his contract at the Bernabeu. Ramos is 29, club captain, and signed a new deal at the club in the summer, keeping him in the Spanish capital until 2020. Neither will come cheap. Indeed, it’s likely that neither will come at all. Not for a club whose Champions League qualification remains uncertain.

Fichajes return however, and they throw a spanner in the works. Liverpool have blown both clubs out of the water with a £62million bid of their own. Paris Saint-Germain also want the 28-year-old.

Disclaimer: None of the above is true.

Deputy Football Correspondent Matt Hughes tells us that 27-year-old Ogbonna has impressed both Manchester clubs massively this season, and could be the subject of a summer bidding war. West Ham signed Ogbonna from Juventus for £10million. He will cost a little bit more, you’d presume.

But this does at least make some semblance of sense on both counts. United are relying on players who don’t actually exist to play at centre-half so far this season. Timothy Fosu-Mensah? Give over. Donald Love? Pull the other one. Ogbonna would be a welcome addition, depending on who the manager is.

AND THE REST
Barcelona’s Argentina forward Lionel Messi, 28, says he would like to return to play in his homeland at some stage of his career…Real Madrid president Florentino Perez is keen to bring in Tottenham’s Mauricio Pochettino or Juventus boss Massimiliano Allegri to replace Zidane if his side fail to win the Champions League this season…Chelsea have held talks with the representatives of Roma midfielder Miralem Pjanic, who has been recommended by the London club’s prospective new manager Antonio Conte, and established the 25-year-old has a £31m buyout clause…Aston Villa’s players believe manager Remi Garde will leave the club in the summer following the club’s seemingly inevitable relegation from the Premier League…Valencia are keen to appoint Gary Neville as their permanent manager on a two-year contract, with the Mestalla club set to speak to the ex-Manchester United defender about potential signings…Borussia Dortmund want to sell £23m midfielder Ilkay Gundogan, 25, a player that Arsenal are interested in.