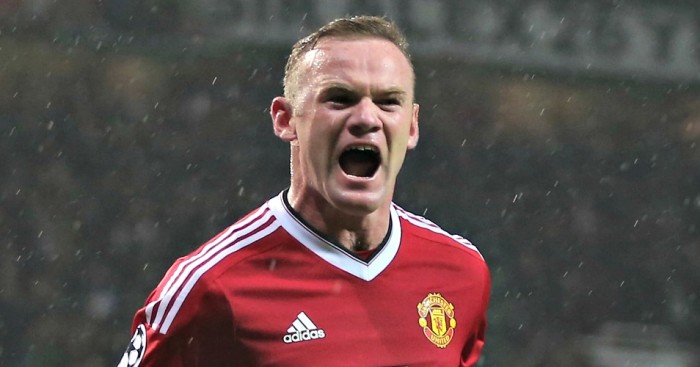 CHELSEA TO SIGN WAYNE ROONEY
‘Chelsea have been made the surprising favourites to complete the transfer of Manchester United star Wayne Rooney,’ report the Metro. It’s based on odds from Sky Bet, which put the Blues at 7/1 favourites to sign Rooney before September ahead of PSG, Everton, Arsenal and Spurs. That selection of teams alone says enough.

In the final paragraph of the story, the Metro add: ‘While Chelsea’s odds are impressive, it’s worth noting that the most likely outcome is for Rooney to stay at United at 1/5.’

That’s surely worth a little more than an aside to an absolutely terrible story based on ridiculous odds with no semblance of credibility whatsoever.

REAL BACK IN FOR DE GEA
Is it that time already?

The Sun are reporting that Real Madrid are ready to renew their interest in Manchester United goalkeeper David de Gea next summer. Of course they bloody do. The Sun also report that De Gea has a £30million release clause in the new Old Trafford contract he signed in September. Of course he bloody does.

Just last month, De Gea discussed the circumstances which saw his move to Los Blancos break down on the final day of the Spanish transfer window, saying: “Nobody let me down or disappointed me – these are things that happen. You must look forward, and I am very happy now.”

With Keylor Navas also in fine form for Rafael Benitez’s side – he has conceded three goals in 13 games in all competitions so far this season and is reportedly in line for a new contract himself – the deal looks less of a certainty than it did earlier this summer.

RONALDO IN LINE FOR UNITED RETURN
It’s a very Manchester Unitedy gossip on Friday (many apologies), and next up is the annual Cristiano Ronaldo to return to Old Trafford line. Is it one of the most boring transfer sagas of all time?

It’s The Sun again, and they claim that the Red Devils are confident they can land Ronaldo ahead of Chelsea (another ridiculous rumour) due to the Portuguese’s ’emotional attachment’ to the club. Yawn.

Basically, Ronaldo is the girl a couple of years above United at school, and the two used to date many years ago. They broke up fairly amicably, even despite the fact that Ronaldo was clearly cheating on United with an older boy, Real Madrid. But she knows that she can flutter his eyelashes at United and they will come running. It’s an ego boost for Ronaldo to know she’s wanted, and an ego boost for United to think she wants them back. The likelihood of the relationship actually being rekindled is slim.

AND THE REST
West Ham are tracking Sporting Lisbon’s Algerian striker Islam Slimani – but may have to fight off Tottenham, who are keen on the star…Steve McClaren has told midfielder Siem de Jong to forget about a return to the Netherlands…Jose Mourinho is weighing up a deal for Paris Saint-Germain full-back Gregory van der Wiel…Tottenham, Stoke City and Charlton are battling for the signature of highly-prized Ebbsfleet winger Shilow Tracey…Bournemouth have been alerted to the possibility of a loan move for free-scoring New York Red Bulls striker Bradley Wright-Phillips…Branislav Ivanovic will ‘probably’ sign a new contract at Chelsea, according to his agent…Manchester United have made Southampton attacker Sadio Mane their primary transfer target in January…Samir Nasri, who has struggled for appearances this season due to competition for places and injury problems, could leave Manchester City…Derby are planning to sign Blackburn left-back Marcus Olsson on loan, with a view to a £1million deal in January.