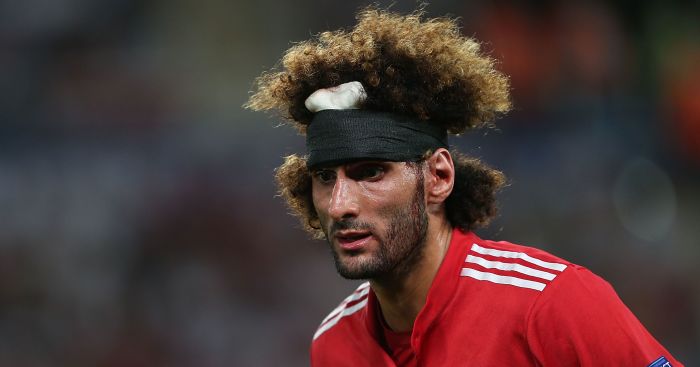 CHELSEA TO MAKE THEIR ROSE MOVE
It was only a matter of time before The Sun reported a club moving for Danny Rose, given their interview last week. It wouldn’t be ideal for Rose if he had made those comments and then no bugger wanted him.

Not quite sure that Chelsea is in the north, and therefore what Rose wants, but Dave Kidd and Andrew Dillon write that Antonio Conte is preparing a £50m bid for the left-back. Surely Tottenham just tell them to do one and see if they go as high as £60m or more?

You do also feel a little for Marcos Alonso. Surely it’s the right-back that Chelsea need to be focusing on most?

JUVENTUS TO BID FOR MAROUANE FELLAINI
Had you been told six, 12, 18 or 24 months ago that Juventus were going to bid for Marouane Fellaini, you’d have laughed. OK, we’re still laughing now too.

Yet had you been told six, 12, 18 or 24 months ago that Manchester United would refuse to sell Fellaini to any interested club because they considered him truly important, you would also have laughed. This time, you ain’t laughing now.

The Sun claim that Juventus will offer £22.5m for Fellaini if they can’t land Blaise Matuidi, but they clearly haven’t been listening to Jose Mourinho say that the Belgian is simply not for sale. We can’t stress this enough, Juventus: it may be a blessing in disguise.

WILSHERE OFF TO VILLA?
Steve Bruce is currently in about 82 different types of trouble at Aston Villa. The football is woeful, the results are woeful and the signings have been woeful. He agreed to pay John Terry £60,000 a week and he currently looks as comfortable as a 36-year-old playing in a new team in a new division that demands a new way of playing. We have to say, we’re loving it.

Still, that doesn’t stop the newspapers linking Bruce and Villa with ridiculous signings, because it seems that is truly the only way to improve a team these days. The Daily Mirror reckon that Villa could make a permanent move for Arsenal midfielder Jack Wilshere, which would surely require a £15m fee and frighteningly high wages.

Incidentally, Bruce was interviewed for the England job 13 months ago. Jesus.

AND THE REST
Newcastle boss Rafa Benitez is expecting to make four more signings after landing Joselu…Crystal Palace attacker Wilfried Zaha is out for four weeks with a knee injury…Everton midfielder Ross Barkley is facing six weeks out with a hamstring problem…West Brom have stuck a £25m price tag on Swansea target Nacer Chadli…Spurs boss Mauricio Pochettino has made Pape Cheikh Diop his number one midfield target.