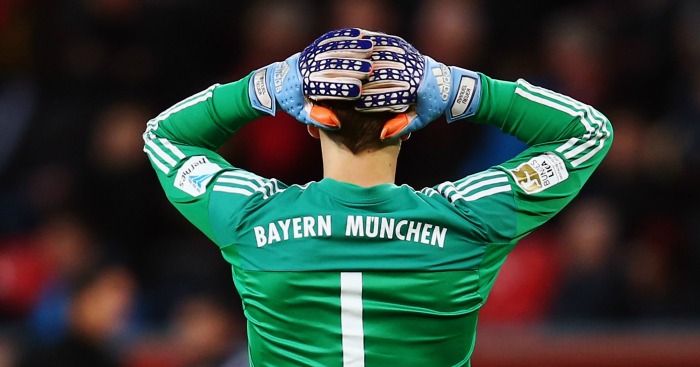 DANNY ROSE HAS TURNED DOWN CHINA?
This is getting a bit silly now. You’ll forgive us for our cynicism – or you’re at least used to it by now – but every day another Premier League player is reported to be the subject of interest from China.

Today’s example is Danny Rose. An exclusive from Rob Maul in The Sun says that Rose turned down an offer of £285,000 after tax to play for Shanghai SIPG in the Chinese Super League.

Saying Rose turned it down rather implies that the move was ever a goer. Tottenham would have had a say in this too, y’know, and there is no evidence offered that the club accepted a bid, nor even that a bid was made.

The story then focuses on new quotes from Rose in which he explains how happy he is at Tottenham. Again you must forgive our cynicism, but this feels like a way of selling some pretty beige quotes.

NEUER BATS AWAY MANCHESTER CITY LINK
If you’re a highly-rated footballer who plays for Bayern Munich, you’re going to be linked with Manchester City. Pep Guardiola’s move to England has led to plenty of speculation that a number of players would follow him, although none have actually made the move yet. Juan Bernat, David Alaba, Douglas Costa and Joshua Kimmich have all been mentioned at one time or another.

Another is Manuel Neuer, which makes some sense given Claudio Bravo’s struggles this season. You want a sweeper-keeper? Well then why not go out and buy the world’s best sweeper-keeper?

Anyway, Neuer has been speaking about the links to Manchester City, and says he is happy in Munich:

“There was no contact and, as you know, I’m happy and satisfied here and I’ve just extended my contract.

“It honours me that there’s speculation and talk about it. Pep still has my phone number but he hasn’t called me, so everything is alright.”

MANCHESTER UNITED WANT BADELJ
Manchester United are interested in signing Milan Badelj after scouting the Fiorentina star earlier this month, according to Firenze Viola. No, we haven’t heard of them either, but this is the local newspaper in Florence.

The paper say that the Croatian is no closer to signing a new contract at the club, with his current deal due to expire in 18 months. That has alerted United and Jose Mourinho, who is apparently a fan of the midfielder. He had him scouted during Fiorentina’s 4-0 defeat to Roma, so that went well.

Apparently Badelj could be the perfect Michael Carrick replacement, but we just don’t see it. He’s just not quite on the level Manchester United would want.

AND THE REST
Diego Costa is ready to sign a new £57m five-year contract with Chelsea… Manchester United have denied Marcus Rashford wants to leave Old Trafford… Jose Mourinho will sit down with Zlatan Ibrahimovic to discuss his Manchester United future this week… Tottenham will make another move to lure Crystal Palace star Wilfried Zaha to White Hart Lane in the summer… Nabil Bentaleb will complete a £16m move from Spurs to Schalke if he starts for the German club this weekend… Atalanta midfielder Franck Kessie has admitted he is “very flattered” by interest from the likes of Manchester United and Chelsea.