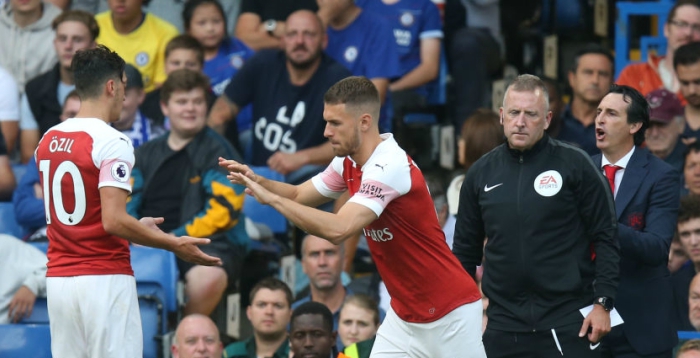 Thus begins John Cross’s Daily Mirror piece on the Arsenal midfielder, who was the centre of attention on Saturday despite not even playing in the 3-1 win over West Ham. Was he ill, or did he and Unai Emery have a bit of a disagreement in training?

The new manager ‘expects more in terms of work-rate’ from the German, who must be enjoying this shock treatment after his cruise under Arsene Wenger. Ozil was ‘told in training last week that he must work harder’ – although Cross sticks to the club line that he missed the game through ‘illness’.

‘Former Sevilla and Paris Saint-Germain boss Emery’s tough training sessions have come as a rude shock for some players used to the short, sharp drills Wenger preferred,’ Cross writes, with Emery framed as the leader of a ‘ruthless’ regime – one Ozil must fight to be a part of.

RAMSEY STREET
That story also contains an update on Aaron Ramsey, who offered the right ‘reaction’ when Emery dropped him against Chelsea. That may be the case, but his future is no closer to being sorted.

Ramsey’s Arsenal contract expires next summer, and ‘there is still no sign of a breakthrough in negotiations’.

The midfielder could even follow the lead of Ozil, whose deal ‘has moved the financial goalposts’ at the Emirates Stadium. The German earns £350,000 a week; Ramsey is on £110,000. And so the Welshman may elect to wait until January to assess his options, knowing that he could command much higher wages elsewhere, without the need for a transfer fee.

Manchester United, Chelsea and Lazio are all linked. As much of a shame it would be to lose him as a Premier League player, that last option would be tasty.

SIMON SAYS
Liverpool are top of the Premier League, but seemingly not all is well at Anfield. Simon Mignolet finds it “bizarre” that Loris Karius was loaned out to Besiktas, and ‘has strongly hinted he still wants to leave’.

The Liverpool Echo reports that the Belgian ‘could yet push for a departure’ before the European transfer window closes on Friday, with the 30-year-old clearly desperate to play regular first-team football. With that big hunk Alisson in front of him, that is unlikely on Merseyside.

But he might have to stay and stick it out, at least for now. Liverpool are ‘unlikely’ to sanction his departure, as Caoimhin Kelleher and Kamil Grabara – both 19 – would be the next goalkeeping taxis off the rank.

AND THE REST
Tottenham defender Danny Rose, 28, could move to Marseille – on loan or on a permanent deal – in an attempt to improve his England chances… Juventus’ former Croatia striker Mario Mandzukic, 32, turned down an offer to join Manchester United… Chelsea owner Roman Abramovich plans to resume redevelopment of Stamford Bridge, contradicting reports the Russian is ready to sell the Premier League club… Manchester United’s English defender Demetri Mitchell is set to rejoin Hearts on loan. The 21-year-old played 11 games for the Scottish side during a loan spell last year.