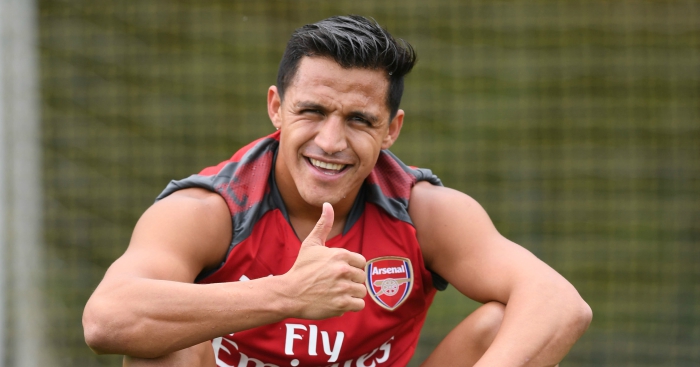 MANCHESTER CITY TO MAKE £60M SANCHEZ MOVE
That’s the thing. You look at Manchester City’s squad and the gap is so obvious. Pep Guardiola is crying out for an attacking player. They only have David Silva, Bernardo Silva, Leroy Sane, Raheem Sterling, Kevin de Bruyne, Sergio Aguero and Gabriel Jesus, and that just won’t do.

In fairness, which club wouldn’t want Alexis Sanchez if they could sign him. The Daily Telegraph’s Matt Law writes that City will offer Arsenal £60m for Sanchez in the hope that it persuades Arsenal to sell. Surely Arsene Wenger can’t go back on his word now?

Just as interesting is Law’s claim that City will offer Sanchez a deal of £400,000 a week, including bonuses and image rights. That is some in-depth knowledge to have passed on, and it seems an incredibly high estimate. Hasn’t Sanchez already intimated that he is prepared to take a lower offer in order to get his move?

SANCHEZ MORE LIKELY TO GO TO SPURS. BUT YEAH
Obviously we’re talking about Davinson Sanchez. Yesterday’s gossip column reported claims in De Telegraaf that Chelsea and Real Madrid were interested in the Ajax defender, but by Tuesday there is better news for Tottenham.

The Independent have an exclusive on the news that the Colombian defender has told Ajax that he wants to leave for Tottenham before the end of the transfer window. Sanchez has turned down the chance to sign a new contract, and thus Ajax are likely to consider cashing in.

Tottenham are going to end up paying around £30m-£35m for Sanchez. Nobody comes cheap anymore, eh.

LIVERPOOL ARE GOING TO MISS OUT ON VAN DIJK, AREN’T THEY?
Oh Liverpool, you silly sausages. There is plenty to admire in Jurgen Klopp’s insistence that he will only consider offers for his top transfer targets rather than moving onto less impressive Plan Bs, but that does make actually signing those top targets important. Liverpool got nowhere with Naby Keita and they might get nowhere with Virgil van Dijk.

The more time goes on, the more likely it is that Southampton will be successful in smoking out bids from Manchester City and Chelsea. Even if they eventually lose their star defender, there is a moral victory in not selling to Liverpool and still getting a whacking great transfer fee.

Southampton have clearly let it be known that they are expecting a fee of over £70m, but will not be bullied into selling to Liverpool. Now is the time for others to move.

AND THE REST
Chelsea are ready to splash £120million on three Premier League stars; Virgil van Dijk, Alex Oxlade-Chamberlain and Danny Drinkwater… Jurgen Klopp has issued a simple but emphatic message for Barcelona over Philippe Coutinho: ‘We don’t want the money’… Chelsea are growing increasingly confident they will agree a £35m deal to sign midfielder Alex Oxlade-Chamberlain… Stoke are set to announce the signing of 24-year-old Paris St-Germain attacker Jese Rodriguez.