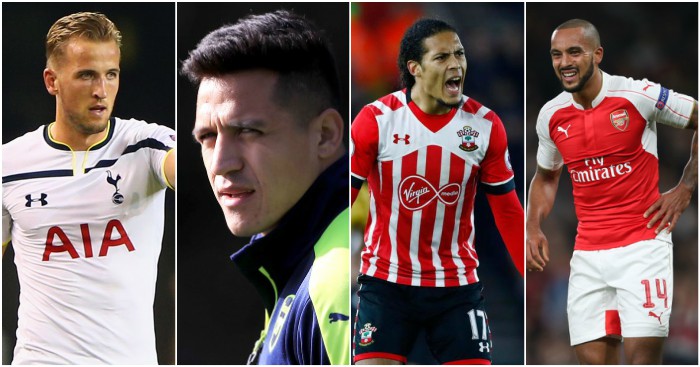 CHELSEA TARGETING SANCHEZ
Tell you what, Alexis Sanchez’s agent is going to be a busy boy in January. We have heard reports of interest from Manchester City, Barcelona, Real Madrid and Bayern Munich. Then yesterday we heard how Paris St Germain were going to bid for Sanchez in January. Now it’s Chelsea.

In the Daily Mirror, Darren Lewis writes that Chelsea will target Sanchez alongside Alex Sandro in January in a bid to keep Antonio Conte happy. Conte is reportedly annoyed at his lack of forward options in the absence of Alvaro Morata.

The story is a little light on detail, in truth. The sum total of the Sanchez section is this:

‘Chelsea could also re-enter the chase for Arsenal striker Alexis Sanchez, who will have just six months remaining on his contract in January. The onus will be on the Gunners to sell for a cut-price fee then rather than risk losing the 28-year-old Chilean for nothing as a free agent next summer.’

The thing is, Arsenal might be content to lose him for nothing next summer. They kind of made that decision in August, albeit before accepting an offer from Manchester City.

REAL MADRID PREPARING KANE BID
Hoo boy. It’s certainly easy to predict the Spanish media when it comes to Real Madrid and Barcelona. Simply choose a paper that backs either of those clubs, pick the player in the world most in form and then wait for them to link said player with said club.

Don Balon are the latest to show off the trick. They say that Real Madrid president Florentino Perez is preparing a £177m offer for Tottenham striker Harry Kane. Of course he is.

In fact, Don Balon use quotes from Eduardo Inda of Spanish TV programme El Chiringuito. “Real Madrid are asking for Harry Kane for next season, but they know the price and it is 200 million euros,” Inda apparently said.

Don Balon take this flimsy information and run with it. They say that Real will sell Gareth Bale and Karim Benzema in order to buy Kane and Paulo Dybala. Those are some very optimistic sums.

ARSENAL READY TO SELL WALCOTT
A rumour that we can believe a lot easier than those Real Madrid shenanigans is that Theo Walcott might be sold by Arsenal in January. Walcott has fallen even further down the queue at Arsenal, playing only 27 league minutes so far this season.

The story comes from Graeme Bailey in the Gambling Times, which makes us several different types of suspicious. Walcott has apparently been told by Arsenal that he will be sold unless he makes big strides before January. None of Arseblog, John Cross, James Olley or Amy Lawrence have the story, all of whom are the go-to people for Arsenal news.

The story then contains quotes from Bet Victor’s ‘head of antepost’, which offers tips on where Walcott could go. This is all a ruse to plug a betting market, isn’t it?

VAN DIJK STILL WANTS LIVERPOOL
It will come as no surprise to anyone that Virgil van Dijk still fancies a move to Liverpool. Just because the transfer window ends and a player finds themselves stuck at a club, it doesn’t suddenly make them want to be there. Van Dijk will play for Southampton, but his heart clearly isn’t in it.

In fact, Van Dijk has started early. The transfer window has been closed for just over a month, but Van Dijk is already talking up a move in January.

“I have no regrets,” Van Dijk told Fox Sports. “Halfway through the season, maybe we can see what’s possible.

“I’m glad I’m fit again and I can give up to 100 percent. Of course, I wanted to make a step up, but Southampton did not want me to sell me. But you’re a professional, so now I’ll give everything to the club.”

That’s lovely, but it’s the “maybe we can see what’s possible” line that sticks. Of course he’s going to push for a move.

AND THE REST
Antonio Conte could leave Chelsea for AC Milan at the end of the season… Manchester City striker Sergio Aguero could miss a further two weeks with a broken rib… Leeds are chasing Liverpool striker Danny Ings… Sam Allardyce is pursuing damages from the FA… Amanda Staveley has met Newcastle United officials and has opened lines of communication for further talks to take place.