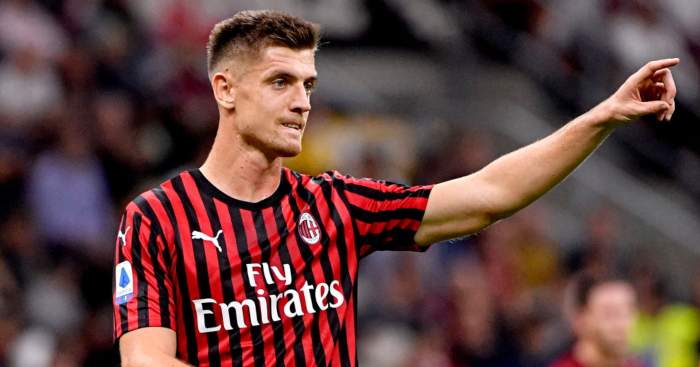 On Thursday, we gossiped over Spurs apparently joining the race for Krzysztof Piatek, who is available only a year after joining AC Milan from Genoa. It was thought Spurs, Newcastle and Villa were all interested but not on Milan’s terms. The Premier League trio would all have preferred to take Piatek on a try-before-you-buy loan deal, but The Sun reckons Spurs’ stance has changed.

They report that Daniel Levy has agreed a deal which could give Milan their money back on Piatek. Spurs will apparently pay £23.8million up front with another £4.2million to follow in add-ons. The 23-year-old is said to be due in London over the weekend to turn his head and cough for the Spurs doctor.

JOSE DELIBERATES OVER DEMBELE MOVE
That may come as a surprise to Goal, which believes Spurs are still considering their options. One of which is Moussa Dembele.

Tottenham are said to be looking into the possibility of a deal for the Lyon striker, who has scored 10 Ligue 1 goals this season. This one might take all the charm Levy can muster since Lyon have already warned any suitors off Dembele, while Jean-Michel Aulas hardly has fond memories of dealing with Spurs.

SPURS LINKED WITH BARCA DEFENDER
The full-back areas are another huge concern for Spurs, and Friday’s papers offers a new link…

The Mirror says Jose Mourinho is keen on Barcelona right-back Nelson Semedo, who could be available due to Barca’s desperation to sign Brazil defender Emerson from Real Betis.

Barca are also sniffing around another Spurs target, Norwich teenager Max Aarons, but Semedo could give both Spurs and the Catalans a deal which suits everyone.

CHELSEA LEAD LEMAR CHASE
Earlier in the week it seemed like Spurs were among the leading chasers for Thomas Lemar. Now it seems they’ve been overtaken by Chelsea.

The Telegraph suggests the Blues could take the Atletico winger on loan until the end of the season as a stop-gap until Jadon Sancho becomes available.

That hardly sounds appealing for Lemar, though the 24-year-old has plenty to prove after Diego Simeone admitted the £60million signing and not ‘lived up to expectations’. There are other clubs, notably in Russia, willing to offer more stability for the winger.

FELLAINI COMING HOME TO DADDY
The stars are aligning for Marouane Fellaini to make his glorious return to the Premier League.

Firstly, the Chinese authorities have halted the CSL gravy train with a series of regulations aiming to stop the import of foreign players on stupid wages. If Fellaini wishes to stay at Shandong Luneng, he would have to take a 75 per cent pay cut.

So the former Everton and Manchester United midfielder would have taken a special interest in David Moyes’ reappointment at West Ham. Similarly, Sky Sports says Moyes is keenly following Fellaini’s situation as he considers signing the Belgian midfielder for a third time.

West Ham are already said to have strengthened their midfield with the signing of Benfica’s Gedson Fernandes on an 18-month loan deal with no option or obligation to buy, but Moyes was being all coy when asked about that on Thursday.

AND THE REST
Man Utd have finally accepted that Christian Eriksen wants to move abroad… Eriksen is due in Milan for talks with Inter… Olivier Giroud has also received a contract offer from Inter… Real Madrid still want rid of Gareth Bale… Leicester won’t give up on Juventus defender Merih Demiral… Arsenal are among the clubs looking to sign 17-year-old right-back Yan Couto from Coritiba… Arsenal have competition from Barcelona for RB Leipzig defender Dayot Upamecano… Newcastle must pay more than £22.5m to land RB Leipzig’s Ademola Lookman… Newcastle are also in for Club Brugge striker Emmanuel Dennis.