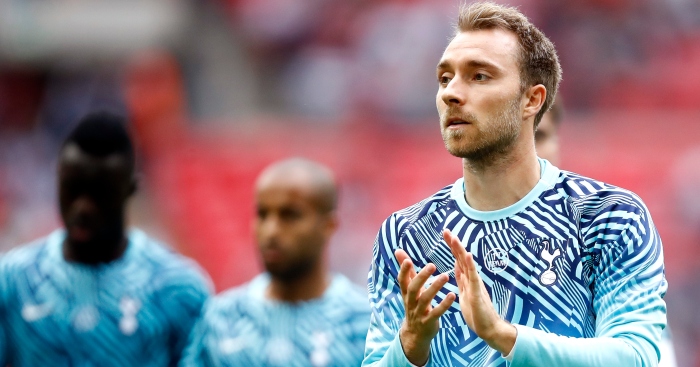 SPURS PLANNING FOR ERIKSEN EXIT
It appears that Tottenham are finally ready to do some transfer business. But it seems they will be provoked into making five new recruits by the likely exits of Christian Eriksen and Toby Alderweireld.

The Daily Mail says Spurs have accepted that Eriksen is set to leave the club this summer with no agreement in sight over a new contract. The Denmark star is approaching the final year of his current terms and the club are preparing to sell before the start of the season rather than lose one of their biggest assets for nothing in 2020. Real Madrid are said to be one of the clubs interested in Eriksen, though since Zinedine Zidane’s return, there are few players in Europe that Real haven’t been linked with. We’ll come to that…

To offset these departures, Spurs are said to be identifying up to five new signings, which include a left-back, a central defender and a centre-forward. Jack Grealish (he’s good), Jarrod Bowen, Carlos Soler, Wilfried Zaha and Aleksandar Mitrovic are all listed by the Daily Mail as potential targets.

While they retain an interest in Eriksen, Eden Hazard is Zinedine Zidane’s preferred playmaker target. The Sun reckons Real will open the bidding at £70million for the Chelsea star who is also approaching the final year of his contract.

The Daily Record also claims that Zidane is interested in Lyon’s former Liverpool target Nabil Fekir, while AS is reporting that the returning manager is not interested in signing Neymar from PSG. Following the signing of Porto defender Eder Militao, Real already have the maximum three non-EU players for next season, which means a return to the club for James Rodriguez is extremely unlikely. El Confidencial says the Colombia star currently on loan at Bayern Munich will be one of a number of players sold, with Real looking to raise €50m each from him at Mateo Kovacic.

AS says some of that cash might be re-invested in Roma midfielder Nicolo Zaniolo.

ARSENAL EYE CELTIC DEFENDER
Arsenal are known to be keen on signing a left-back this summer, which leads us to reports in The Mirror this morning of interest in Kieran Tierney.

The Celtic defender has been monitored by most of the big hitters south of the border but it seems the Gunners are most keen, along with Leicester.

The Foxes are making plans to replace Ben Chilwell, who is wanted by Manchester City providing they are allowed to sign players this summer. However, Leicester’s hopes of signing Tierney have been hampered by interest from Unai Emery.

The Arsenal boss is looking to make his budget stretch as far as possible, with Goal France claiming the Gunners have also held talks with Rennes over winger Ismaila Sarr.

AND THE REST
Manchester United have joined the race for Paris St-Germain midfielder Adrien Rabiot… Burnley are open to selling Nick Pope for £10m this summer… Juventus will go all out to sign Kylian Mbappe this summer… Newcastle are considering Lyon boss Bruno Genesio as a possible replacement for Rafael Benitez.