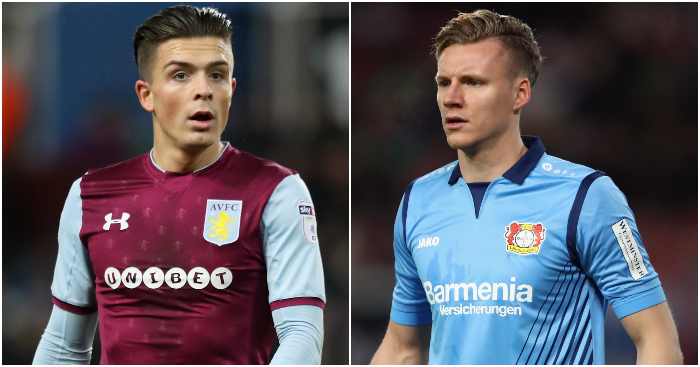 SPURS EYE HUGE DISCOUNT ON GREALISH
Daniel Levy has spotted an opportunity in Aston Villa’s current money troubles. The Villans were previously insistent on not selling Jack Grealish for less than £40million, but the Tottenham chairman smells blood…

Grealish is understood to have been identified as a target for Spurs this summer and, according to The Telegrapgh, Levy reckons he can deliver the playmaker for a lot less than Villa’s valuation.

Indeed, it is claimed that Levy is eyeing a discount of more than 60 per cent. Villa could be offered just £15million for Grealish, with Villa’s bargaining position severely weakened by the need to keep the wolves from the door.

Crystal Palace, though, won’t roll over to have their belly tickled like Villa. The Daily Mail reports that Spurs have cooled their interest in Wilfried Zaha after being quoted £70million for the 25-year-old.

UNITED PLAN FOR DE GEA SALE
We love the smell of bullsh*t in the morning and there’s a hefty stench wafting over from Spain concerning David De Gea.

The Man Utd goalkeeper is said to be keen to join Real Madrid, which is hardly revelatory stuff. But Diario Gol claims the Red Devils are willing to do a deal. On one condition…

They apparently want Atletico Madrid stopper Jan Oblak signed and sealed before taking any of Real’s calls over De Gea. Liverpool were linked with Oblak but they have apparently been put off after learning Atletico’s asking price, which is said to be in excess of £80million.

Given there’s little profit to be made, it is hard to see how the deal appeals to United unless De Gea throws his gloves out of the pram, which he has never showed any sign of doing previously.

LIVERPOOL’S LATE SHOW WITH LENO
If Liverpool don’t fancy forking out for Oblak then Bernd Leno might be more appealing at around a quarter of the price.

Bild claims Liverpool have joined the race for the Bayer Leverkusen keeper, who seems certain to be on the move this summer, with Leverkusen already having signed his replacement.

Arsenal and Atletico Madrid’s interest in the 26-year-old was already apparent but now Jurgen Klopp is lurking as he scours Europe for a competent keeper.

It is said that Leno’s future will be sorted ‘in the next few days’ before he disappears on holiday after being cut from the Germany squad for the World Cup.