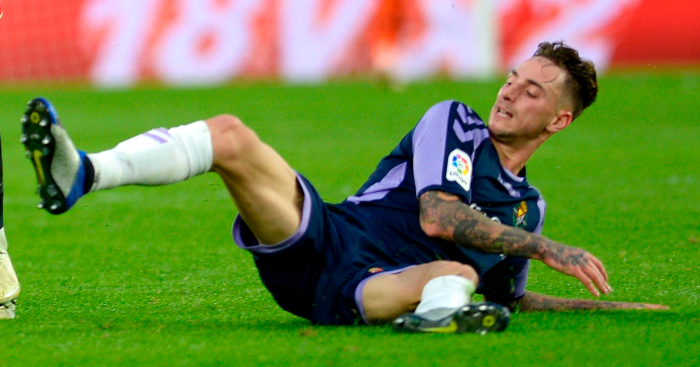 HOTCH POCH
It looks like Manchester United and Real Madrid are both fans of Football365. How else would you explain them stepping up their interest in early winner Mauricio Pochettino?

The Guardian say ‘Tottenham are braced for further interest’ in their manager, whose reputation was enhanced even further after Tottenham recovered to secure unlikely progression to the Champions League knockout stages with a 1-1 draw away at Barcelona.

‘It is an open secret at the club that they expect a fight to keep Pochettino at the end of the season,’ David Hytner writes, saying that while United are ‘admirers’, Real are sure to be looking at bringing him in. They have struggled to replace Zinedine Zidane since his summer departure, with Julen Lopetegui already having been sacked, and replacement Santiago Solari overseeing a 3-0 home defeat to CSKA Moscow on Wednesday.

Hytner says Pochettino used his pre-match press conference as ‘an opportunity…to remind a largely Spanish audience of the quality of his work’, adding that ‘the amount of time’ he ‘spent in friendly conversation with Spanish journalists’ was ‘certainly eye-opening’.

The Daily Mirror do not bring much else to the table, simply saying that Real and United have made Pochettino ‘their No.1 target to become their next manager’. And that ‘there is a growing fear’ at Tottenham that he could be lured away. Not even he could have extracted a performance out of that sorry United side in Valencia on Wednesday.

CALERO SHOTS
Laurent Koscielny has planned his Arsenal return to perfection, recovering from a long-term knee injury just as Rob Holding suffered one of his own. And despite the captain preparing for his first start in seven months, the Gunners ‘will swoop for a new centre-back’ in January.

Bailly is undoubtedly struggling to settle at United, but there is absolutely no chance that Arsenal would be able to sign him for much less than the £30m the Red Devils paid in 2016. Cahill is more of a possibility, although that depends on whether he wishes to leave Chelsea for another London club.

Calero ‘could be the most likely’ option, ‘ as he has a £10million release clause and could be available’. But Unai Emery is certain he wants enough defenders to cover his preferred formation with three centre-halves, and he does not want to use Nacho Monreal or Stephan Lichtsteiner there.

Calum Chambers cannot be recalled and Konstantinos Mavropanos is injured, meaning someone might have to come in.

AND THE REST
Chelsea’s Spanish forward Alvaro Morata, 26, has been offered to Barcelona… Juventus want to sign Manchester United’s France midfielder Paul Pogba, 25, for £80m in January, or use the money to fund a move for Real Madrid’s Spanish attacking midfielder Isco, 26… Spanish striker Fernando Llorente, 33, says he would be prepared to return to former club Athletic Bilbao after struggling to make his mark at Tottenham… Former Ivory Coast midfielder Yaya Toure, 35, believes he can still play in the Premier League. The ex-Manchester City player left Olympiakos after three months on Wednesday and has already turned down offers from Chinese Super League and MLS clubs… Atlanta United’s Paraguay midfielder Miguel Almiron, 24, will cost Arsenal or Newcastle more than £30m.