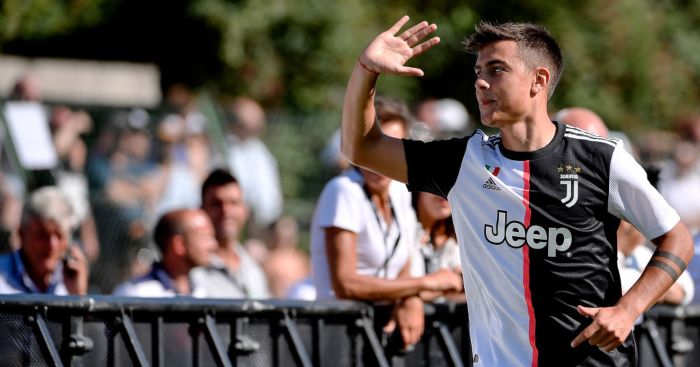 ABSOLUTE BALA
The Serie A season has started pretty much as Paulo Dybala feared: with a distinct lack of opportunities. An unused substitute in Juventus’ opening victory over Parma, he was given just 14 minutes to impress in the 4-3 win against Napoli.

It should have been different. The Argentine ought to have either been embarrassing David Luiz with a north London derby hat-trick or being injected with Manchester United DNA. As it is, he is stuck in Turin behind Cristiano Ronaldo, Gonzalo Higuain and Douglas Costa. Being on the same level as Juan Cuadrado and Mario Mandzukic was never part of the plan.

Paul Brown of the Daily Star, Daily Mirror and more suggests he might have to wait it out until only January for a reprieve. Tottenham ‘will again be offered the chance’ to sign him in the winter, as Mauricio Pochettino ‘remains a big fan’.

Juventus ‘need to bring in funds’ after finally checking their wage bill and realising it really is quite offensive. ‘Intermediaries’ therefore ‘believe Dybala will hit the market again’ as their most valuable but dispensable asset.

The obstacles posed by his salary, image rights and agent fees will be no less daunting when there is just one month to overcome them. That probably explains why United ‘are unlikely to revive their interest’. But Tottenham will be back in for the £65m-rated forward.

CHRISTIAN LOUBOUTOMY
Remember that £50m ‘compromise’ Tottenham came to with regards to Christian Eriksen? It could come into play in a few months. Atletico Madrid are said to ‘have joined the queue’ to sign the Dane, despite the fact they were pretty much heading it for plenty of the summer.

Diego Simeone’s side are on the midfielder’s ‘trail’, along with Manchester United, Inter Milan and Juventus. The Daily Express add that Zinedine Zidane ‘is still keen’, so Real Madrid can be lumped in there, too.

Of course, Eriksen can sign a pre-contract with any non-Premier League side from January onwards, with his Tottenham deal expiring at the end of the season. Not even Daniel Levy could get £50m out of this one, surely?

AND THE REST
Manchester United have contacted Paul Pogba’s agent to discuss extending the France midfielder’s contract beyond 2021. The 26-year-old was linked with a move to Real Madrid in the summer… Manchester City manager Pep Guardiola will target a new centre-back in January even if injured France defender Aymeric Laporte, 25, is close to a return… Chelsea’s 32-year-old France striker Olivier Giroud has opened the door for a potential move to Major League Soccer in the United States… Inter Milan enquired about Borussia Dortmund’s Germany midfielder Mario Gotze in August and could move for the 27-year-old in January… Derby’s Polish defender Krystian Bielik, 21, says AC Milan wanted to sign him before he moved from Arsenal to the Rams in the summer.