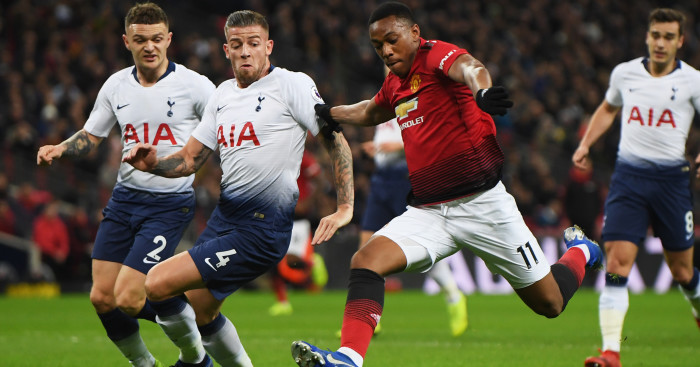 TOBY OR NOT TOBY?
On Wednesday, The Sun reported that Manchester United were not going to sign a centre-half this summer as Ole Gunnar Solskjaer ‘wants to give his defenders a chance to prove themselves’. By Thursday, the Daily Mirror say United ‘are set to push their way to the front of the queue’ for Toby Alderweireld.

The Tottenham centre-half is once more the subject of speculation as Darren Lewis can hold his tongue no more. Alderweireld was always going to be linked with other clubs after Tottenham activated a £26m release clause to extend his contract to 2020, but the rumours have started again as early as March.

Tottenham are apparently ‘resigned’ to losing the Belgian, and ‘will have no option but to sell’ if they cannot persuade the 30-year-old to sign a new contract in north London. Barcelona and Juventus are also interested. No wonder.

As a sidenote, it is mentioned that United ‘are willing to listen to offers’ for Eric Bailly. Just probably not from Arsenal.

IVAN TERRIBLY UPSET
Alderweireld will not be joined at Old Trafford by Ivan Rakitic. The midfielder had been linked with a move to United recently, while former manager Jose Mourinho called him “one of the most underrated players in the world” earlier this month.

But  the London Evening Standard say United ‘have cooled interest’ in the Croatian as they are now convinced that Paul Pogba wants to stay.

Rakitic was considered to be ‘a potential replacement’ for the world champion, yet the club’s resurgence under Solskjaer has persuaded Pogba to stay. The interim manager ‘will seek to build a team around’ him.

The Sun back up the claims with their exclusive report that Pogba ‘has no plans to quit’ the club after ‘a series of private talks’ with Solskjaer, during which he even outlined his wishes to captain United in the future.

‘A [sic] Old Trafford insider’ said that “Pog is the future of this club and is not going anywhere”. But both The Sun and the Evening Standard say there are no plans afoot to open contract negotiations with the Frenchman, who has two years left on his current deal.

AND THE REST
Leicester City paid Celtic £9m in compensation for manager Brendan Rodgers and his backroom team… Hull City’s Jarrod Bowen rejected a £12m move to Cardiff City after the Bluebirds attempted to sign him when Emiliano Sala was missing, but not confirmed dead. The 22-year-old forward said the “whole situation was very uncomfortable”… Rafa Benitez will be ordered to sign younger players if he agrees a new contract at Newcastle. The former Liverpool boss is likely to face a battle to make 29-year-old West Brom striker Salomon Rondon’s loan permanent… Real Madrid look set to beat Manchester United in the race for Porto defender Eder Militao’s signature. The 21-year-old had been the subject of a rumoured £45m deal.