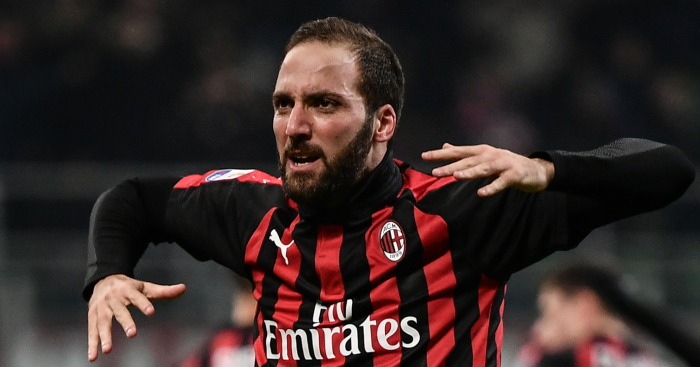 SPEEDY GONZALO
Just as Gareth Bale’s greatest season came under the guidance of Andre Villas-Boas, Gonzalo Higuain has never quite reached the heights he did when managed by Maurizio Sarri. For just one season in 2015/16, the striker was genuinely one of the best in the world.

With 38 goals in 42 games, Higuain’s form even helped him become the most expensive signing in Serie A history when Juventus came calling in summer 2016. But two and a half years on, his relationship with Sarri might be rekindled.

Spanish newspaper Marca bring us the latest on an English club signing an Argentinean player from an Italian club, where he is currently on loan from another Italian club. They say Higuain ‘has already said yes’ to joining Chelsea, who really bloody need him.

Milan loaned Higuain from Juventus last year, and while he has been in decent form – scoring eight goals in 20 games – the fee to buy him at the end of the deal is proving problematic. Chelsea, however, ‘seem willing to pay in summer’.

That deal mean ‘the exit doors will be opened definitively’ for Alvaro Morata to leave Stamford Bridge. His destination is still up for debate. But it seems that Higuain is headed to the Premier League.

SILVA LINING
Or maybe not. The Sun know something no-one else does: that Chelsea ‘are hoping Andre Silva can solve their striking crisis’.

Silva is currently on loan at Sevilla – from Milan, come to think of it – where he has scored eight goals in 16 La Liga games. He ‘has done enough to convince Chelsea to make a move,’ says Jamie Gordon.

But the deal ‘hinges’ on Morata going the other way on loan. A return to Spain, where he scored 31 goals in 95 games and won eight trophies, could certainly appeal.

CHRISTIAN BELIEVERS
Let’s go back to the Spanish daily newspapers, because they’re better than ours. And AS have news on Christian Eriksen, Tottenham and Real Madrid.

Eriksen’s future in north London remains uncertain. His contract expires in 2020, and negotiations are seemingly going nowhere. Not for the want of money either: Spurs have offered up to £250,000 a week to the Dane.

Earlier this week, we were told Real were preparing a move that could cost up to £100m. Now AS are telling us that Daniel Levy has placed a world-record fee of €250m (£224.6m) on Eriksen’s beautiful little face.

That figure has apparently ‘cooled the white interest’, but Eriksen’s reluctance to sign a new Tottenham deal still ‘plays in favour of Madrid’. They know that if Spurs do not renegotiate his contract, he can leave for considerably less in the summer and, if it comes down to it, for nothing in 18 months.

AND THE REST
Tottenham’s former Spain striker Fernando Llorente, 33, has been offered the chance to return to Athletic Bilbao… Inter Milan are prepared to sell Croatia forward Ivan Perisic, 29, to Manchester United to raise funds to sign Real Madrid and Croatia midfielder Luka Modric, 33… Inter and Argentina striker Mauro Icardi, 25, is at the top of Chelsea owner Roman Abramovich’s wish-list for the January transfer window… Bayern Munich have increased their offer for Chelsea forward Callum Hudson-Odoi to £35m, with the 18-year-old having reiterated his desire to leave Stamford Bridge this month… Spurs are set to hold talks with out-of-favour Dutch striker Vincent Janssen and will consider letting the 24-year-old striker leave in the January transfer window.