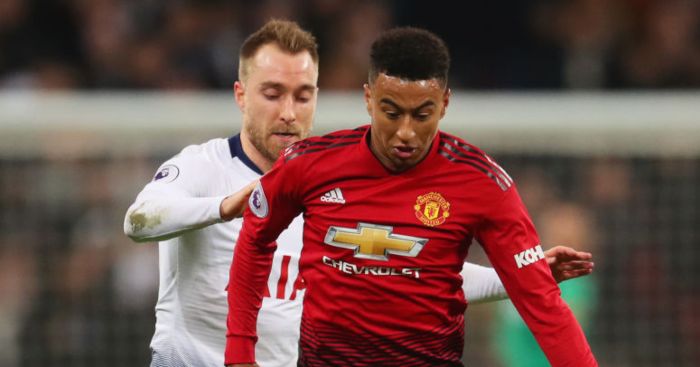 CHRISTIAN BAIL
It seems that the joke is on F365, as the first step towards this Manchester United monstrosity…

Or for Pochettino to play Paulo Dybala in a midfield three.

Or for him to spend all that money but not improve on Scott McTominay. pic.twitter.com/5DI2CSyZZ5

…could be taken in January. No, Paulo Dybala isn’t joining to play in central midfield with Scott McTominay. Rather, Christian Eriksen will be targeted as his Tottenham contract draws to a close.

Goal.com say that ‘additions to the squad could be made as soon as the winter window’ as Ole Gunnar Solskjaer ‘retains the backing’ of yer man Ed Woodward. And with United ‘aware’ that Tottenham won’t want to lose Eriksen for free in the summer, they will look to capitalise on the situation.

It all depends on whether the two clubs can ‘agree a cut-price fee’, which does seem unlikely. It was reported earlier this week that Spurs would settle for £30m, but that would surely change when the buying club is a direct Premier League rival.

Eriksen does still favour a move to Spain, and would earn a more lucrative contract as a free agent as he would by leaving in January. But he remains a target for United, while Real Madrid’s interest is a little less concrete.

FAST AND FURIOUS
One reason why Tottenham might cut their losses is that Eriksen seems central to a growing rift between Mauricio Pochettino and his players.

The Sun – yes, we know – say the Tottenham squad is ‘furious’ with the manager after his “different agendas” comment in midweek. A ‘source’ has told them that “they feel Poch is the one with an agenda,” and “They are not impressed with him at all and what he said has not helped at all.”

What’s more, “the players feel Christian was always being up front and honest about wanting to leave.” Oh, and “some of the players feel that Poch does not like it if he doesn’t get his own way.”

If it comes down to it, are Tottenham going to choose the midfielder whose contract expires in less than a year, or the manager who took them to a Champions League final?

SCOUTING FOR GOALS
The Sun also say that Solskjaer has appointed his very own personal scout. But he did not advertise for the job on LinkedIn – the internal promotion of sorts has been handed to Simon Wells, a member of United’s recruitment team.

The move ‘comes with United’s blessing’ and will see Wells ‘report directly to the manager,’ who ‘is leaning on Wells for reports on his own targets’ while United pursue their own. Sounds perfectly logical and not a complete waste of resources.

Solskjaer and Wells worked together when the former was manager of Molde and the latter scouted Scandinavia for United. Wells is also partially credited with the signing of Victor Lindelof, as well as being one of the ‘first looking’ at non-Scandinavian Joao Felix when he was at non-Scandinavian Benfica.

Maybe he could use his Danish links to persuade Eriksen to move up north?

AND THE REST
Paul Pogba has asked Manchester United for a new deal worth £600,000 a week. The France midfielder, 26, is aware of interest from Juventus and Real Madrid… Paris St-Germain forward Neymar and former club Barcelona are yet to settle a dispute over loyalty payments after a possible agreement to avoid a trial collapsed… Lawyers representing Neymar and Barcelona have set a second court date for 21 October… Brazil international Neymar, 27, was willing to drop the case if Barcelona had committed in writing to signing him again… Manager Jose Mourinho wants to return to Real Madrid, having turned down offers from Monaco, Lille, Wolfsburg, Schalke and AC Milan since he was sacked by Manchester United last year… Juventus and Argentina striker Gonzalo Higuain, 31, has hinted he will return to first club River Plate after his contract ends in 2021… Bayern Munich president Uli Hoeness says his club could renew their interest in Manchester City and Germany winger Leroy Sane, 23, in January… Southampton and Manchester City are scouting 17-year-old Hearts defender Aaron Hickey… Aston Villa have been offered £7m for Ivory Coast striker Jonathan Kodjia, 29, by Qatari side Al-Gharafa.