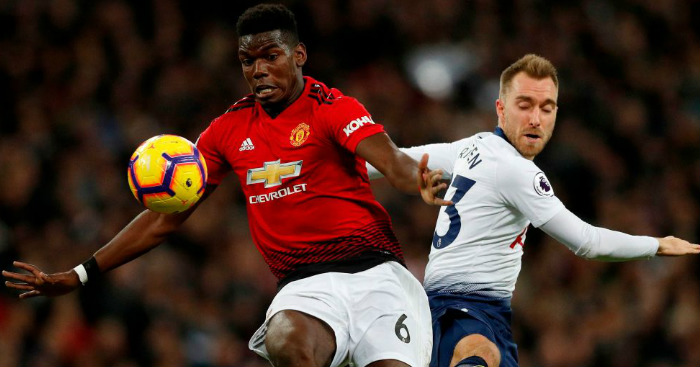 CHRISTIAN BELIEVERS
The juiciest transfer speculation is often saved for Sunday morning, such as the Daily Express claim that Manchester United will spend ‘in excess of’ £200million this summer. And according to the Sunday Mirror, a portion of that will be set aside for Christian Eriksen.

Steve Bates makes a gloriously vague mention of ‘a hefty transfer fee up to £95million – or more,’ with the Tottenham midfielder ‘a high priority summer target’ for Ole Gunnar Solskjaer’s side.

They face inevitable competition from Real Madrid but United believe Zinedine Zidane’s sign might be too occupied by their efforts to sign Eden Hazard and Paul Pogba to notice a presumably cut-price Eriksen leaving Tottenham in the final year of his north London contract.

Eriksen has so far refused to extend his deal as he quite justifiably wants a sizeable increase on his current £80,000-a-week wage, with Harry Kane’s £200,000 a week a possible sticking point.

Daniel Levy would seemingly rather let him leave for free next summer than sell him to a direct Premier League rival at the end of this season, so it’s all finely balanced. But ‘handing Eriksen up to £250,000 a week would be no problem for United’. And just like that his wages are more than trebled.

TOBY OR NOT TOBY?
It would be quite something if Tottenham lost both Eriksen and Toby Alderweireld to fellow Premier League clubs this summer. It would be quite hilarious if the latter channelled his inner Sol Campbell in doing so.

The Sun on Sunday say that the £25m release clause that will become active in Alderweireld’s contract this summer has understandably attracted the interest of England’s top flight.

‘There have been no official approaches as yet,’ but his bargain price will undoubtedly appeal to an Arsenal side who might only have around £40m to spend this summer.

Manchester United, Chelsea and Manchester City are also said to be monitoring developments, with Tottenham themselves eager to discuss fresh terms. Best of luck.

MAXI DRESS
Tottenham’s reaction to losing a defender and a midfielder is to sign a West Ham-linked striker battling relegation in La Liga. That is a harsh description of Maxi Gomez, but still.

The Mail on Sunday say the Celta Vigo forward ‘is keen to play for a club in European competition,’ which likely rules West Ham out of revisiting their past interest. But Tottenham might feel his 11 goals and five assists in 29 La Liga games this season represents ideal cover for Harry Kane and Fernando Llorente.

The 22-year-old Uruguay international has a £43.5m release clause in his current Celta contract, but the Spanish club ‘expect to field lower offers’ for him this summer.

AND THE REST
Arsenal’s Swiss midfielder Granit Xhaka, 26, has emerged as a shock transfer target for Inter Milan, with the Italian giants considering a huge summer spending spree… Barcelona could make another move for Chelsea winger Willian. The La Liga side previously had a £55m bid for the Brazilian, 30, turned down… Leicester City boss Brendan Rodgers is keen to reunite with Liverpool striker Daniel Sturridge, and is prepared to bring the 29-year-old Englishman to King Power Stadium on a free transfer.