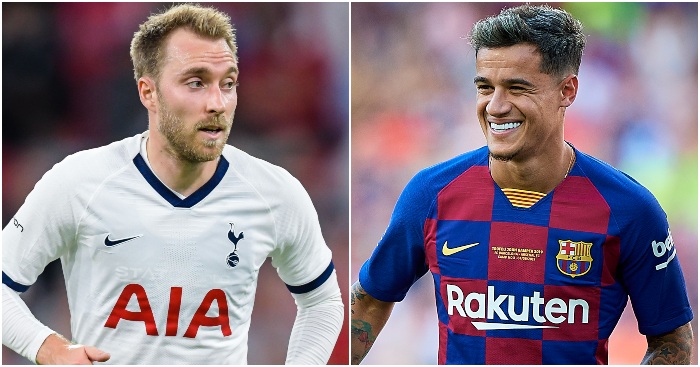 LEVY TARGETS DYBALA
Today’s gossip is really a Tottenham special, brought to you – of course – by Daniel Levy’s incessant need to do everything at the very last minute.

First up, Paulo Dybala. Spurs have agreed a £62m fee with Juventus for the player, but – according to Sky Italy & The Mail – are still a long way off actually getting a deal done. Mauricio Pochettino has reportedly spoken to Dybala in person, but the player’s wages are a problem and his image rights, which would need to be purchased by Spurs, are another.

ERIKSEN HEADED TO UNITED
Second, Christian Eriksen – he’s leaving Tottenham, or at least that seems to be the hope. The Mirror report that Spurs have been actively shopping him around the continent, eager that he doesn’t leave for free in a year’s time. The Independent reported late last night, though, that Manchester United are the closest to actually signing him and that negotiations between the two clubs have reached an advanced stage.

COUTINHO BACK TO ENGLAND
…but, if Eriksen does leave, ESPN report that they’ll look to bring in Philippe Coutinho on loan (with a view to a permanent deal) from Barcelona as a replacement. It had been suggested on Tuesday that Arsenal were chasing Coutinho, but that was swiftly knocked down and it seems that if he is to return to England, then Spurs would be his only option at this point.

And he did play for Pochettino briefly at Espanyol, so there’s that too.

WATFORD AND EVERTON BACK AT IT
Off to the side, Watford and Everton are having their own private war over Abdoulaye Doucoure. A bid of just over £30m was rejected last week and now, according to Sky Sports, Everton have just had a second of £36m turned down.

Obviously the Marco Silva situation complicates matters and there’s the perception that Watford would rather sell Everton the deeds to Vicarage Road than hand over Doucoure, but their interest does seem fairly determined. Not that it will likely matter: Sky report that Watford have no interest in dealing with Everton and are prepared to stonewall any further bids.