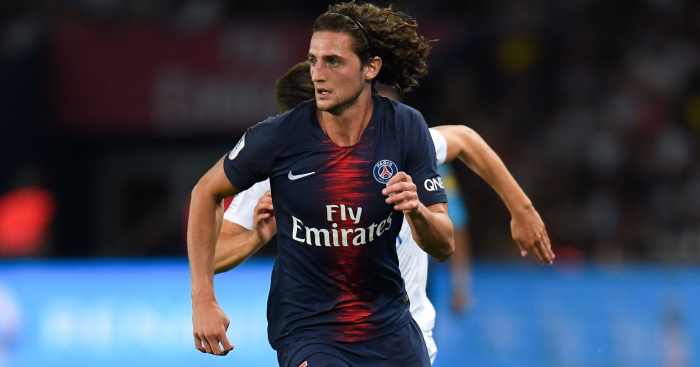 RABIOT PREFERS LIVERPOOL
Adrien Rabiot will presumably end up at Barcelona, but PSG would quite like the Frenchman to leave for Spurs this January, not least because they would get a tidy transfer fee. Leading local website Paris United claim that Tottenham have made Rabiot an offer of a £4.32m signing-on bonus and £125,000 a week; they also have Serge Aurier and Lucas Moura in their corner, whispering in Rabiot’s ear (well, sending him WhatsApps).

The problem? Rabiot is not for joining Spurs. He would rather join Liverpool, who have always appealed to him because of his love of Steven Gerrard. He also admires Jurgen Klopp.  He presumably does not feel the same way about Jake Livermore and Mauricio Pochettino.

PSG OFFER FOR GUEYE
Cheeky f***ers. According to Sky Sports News, ‘Paris Saint-Germain have tabled a £21.5m bid to sign Everton midfielder Idrissa Gueye’. That’s basically nowhere near enough money for one of the best defensive midfielders in the Premier League. Unsurprisingly, Gueye – who is 29 – is rather keen on the idea. Who wouldn’t be keen on leaving Everton right now?

Basically, PSG will have to come back with a whole load more money for Gueye in order to tempt Everton. They will want a figure closer to the £35m that PSG are willing to pay Zenit St Petersburg for Leandro Paredes.

TIELEMANS TO LEICESTER?
Wow. Youri Tielemans is a 21-year-old Belgian midfielder who plays pretty much every game for his country, and he might be joining Leicester City? Well, well. According to the Leicester Mercury, ‘Leicester City have entered talks with Monaco over Belgian international Youri Tielemans’. They have lost Vicente Iborra in this transfer window – and Adrien Silva is likely to follow – so they are looking for a playmaker. And they apparently believe they can get Tielemans for £20m.

He joined Monaco in the summer of 2017 for a similar fee and has scored five Ligue Un goals this season for the strugglers. Maybe Leicester really are a step up from there?

Radio silence in Youri Tielemans’ camp over the possible Leicester interest. #LCFC are definitely looking for an extra midfielder. pic.twitter.com/5ErKvqjRJN

AND THE REST
Newcastle, Burnley and Cardiff are looking at Everton winger Yannick Bolasie…Southampton have made an £8m bid for Birmingham forward Che Adams…AC Milan remain keen on signing Watford’s Spanish winger Gerard Deulofeu…New Stoke manager Nathan Jones wants to freshen up his squad by listening to offers for experienced trio Bojan, Darren Fletcher and Peter Crouch…West Ham defender Reece Oxford, 20, is wanted by Martin O’Neill at Nottingham Forest…Wales forward Ben Woodburn could join Hull on loan from Liverpool after returning from Sheffield United…Leeds are hopeful of signing Swansea winger Daniel James but will have to increase their bid of £3m for the 21-year-old Welshman.