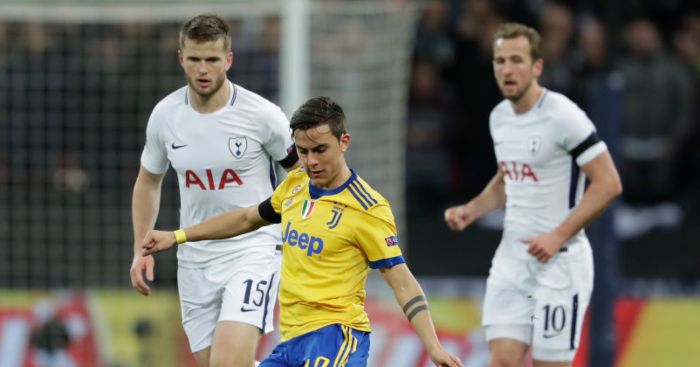 CHRISTIAN BELIEF
And so it comes to this. Tottenham started the summer valuing Christian Eriksen at £100m, received no offers, saw the Premier League deadline pass in the knowledge they could no longer sign a replacement, continued to wait and would now accept half their initial demand as the European transfer window enters its final week.

That is the gist of the Daily Mail story, which says that Mauricio Pochettino and Daniel Levy ‘will come to a compromise’ and ‘consider’ an offer of £50m or more for the Dane.

While Pochettino ‘believes his squad is better with Eriksen in it,’ Levy quite understandably ‘will want to make money on a player whose contract expires at the end of this season’.

Real Madrid, Atletico Madrid and Juventus have been credited with an interest in Eriksen throughout the summer. They have nine days to send some money in the direction of north London.

JU WANT SOME?
Will Tottenham reinvest those funds as soon as possible? Perhaps.

Alasdair Gold, the club’s Football.London correspondent, has done something of a Q&A with regards to transfers. Among the many Qs he kindly A’d was one on Paulo Dybala.

After suggesting that the future of Neymar will dictate much of what happens to potential PSG target Dybala, Gold says Tottenham remains a possible destination.

“If the window closes and Dybala is still at Juventus then Spurs would be right to think they still have a chance to sign him in January,” he said.

“There’s a lot of ifs, buts and maybes but it is believed that Spurs had an agreement with Juventus and Dybala but it was just the messy situation with the image rights that couldn’t be sorted over the four weeks or so that the parties were all in negotiations.

“Four months of course is a lot longer to fix those issues but that’s also a long time for anything to happen. If the window closes and he’s still in Turin, then I wouldn’t rule out Spurs making another attempt to bring him to England.”

Eriksen to Juventus for £50m next week and Dybala to Tottenham for all of the image rights in January confirmed.

PJANIC! AT THE DISCO
On a similar note, Calciomercato say ‘anyone can really leave’ Juventus ‘if the right offer arrives’.

Anyone ‘apart from Cristiano Ronaldo’, of course. And any departee must ‘accept the transfer’, meaning that Miralem Pjanic could be on his way out.

As ever, PSG are the club linked. The midfielder ‘could find the strength to make Juve waver like never before’, but it will require ‘a high offer, very high’ to see him leave.

Calciomercato namedrop Dybala and Emre Can as other players who could be allowed to go, while Pjanic is said to only be open to the idea of joining a select few clubs. Fortunately, that list includes PSG.

AND THE REST
Real Madrid remain interested but are seeking assurances from Paris St-Germain over 27-year-old Brazilian forward Neymar’s injury-prone metatarsal… But some reports claim Real Madrid and Barcelona are put off by Neymar’s high wage demands… The father and agent of Arsenal’s 27-year-old centre-back Shkodran Mustafi admits he is working on a move away from the club… Liverpool centre-back Virgil van Dijk, 28, is expected to sign a new contract with the Reds which will double his wages to £250,000 a week… Burnley manager Sean Dyche says winger Dwight McNeil, 19, will outgrow the club at some stage… Real Sociedad are trying to sign Arsenal’s Spanish full-back Nacho Monreal, 33… Crystal Palace are negotiating a new deal with Belgian striker Christian Benteke, 28… Bayern Munich are set to replace Renato Sanches, who has joined Lille, with 22-year-old Espanyol midfielder Marc Roca… Real Madrid manager Zinedine Zidane does not expect 32-year-old goalkeeper Keylor Navas to leave the club, despite the Costa Rican being linked with Paris St-Germain.