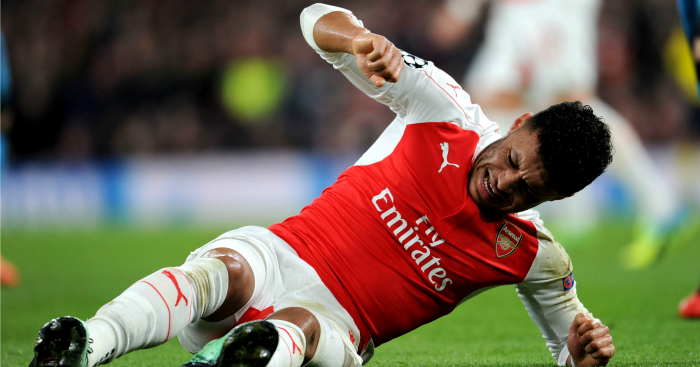 OXLADE-CHAMBERLAIN TO CITY
There have been a number of whispers about the future of Alex Oxlade-Chamberlain, with West Ham mentioned in more than passing. Weirdly, people won’t stop talking about Manchester City.

The Times say that Alex Oxlade-Chamberlain is a target of Pep Guardiola when he takes over at City this summer.

We’re not doubting the validity of the rumour, but there are a few things to say here:

1) Oxlade-Chamberlain wants to leave Arsenal because he isn’t getting enough first-team football.
2) City have Kevin de Bruyne, Raheem Sterling and David Silva already.
3) City are also likely to buy another attacking player who will command a first-team place.

The point is obvious. Is Oxlade-Chamberlain really likely to get more league minutes at City than at Arsenal?

This is a player who has stagnated at his club, we don’t know what he does and he is a Plan B at Arsenal.

It’s definitely not a story manufactured by an agent because the most glamorous interest so far has come from West Ham.

Top of the list is centre-half Toprak. The Turkish will not come cheap. A transfer fee of approaching £28million being suggested.

Toprak has played 159 times in all competitions since joining the Bundesliga club in 2011 and has also generated interest from Bayern Munich and Atletico Madrid, but he is contracted until 2018.

The interest in fellow Turk Calhanoglu is nothing new, An attacking midfielder known as something of a set-piece specialist, Calhanoglu is also rated in the £30m bracket.

Forward Bellarabi, meanwhile, has not previously been linked with United, but has been mentioned as a possible target for Liverpool and Arsenal. The German is capable of playing on the left or right of an attacking three.

It’s unlikely United will sign all three, but we’re told that they would have to spend up to £90million to land all three players.

AUBAMEYANG ISN’T COMING AFTER ALL
On November 21, The Sun told us that Chelsea could sign Borussia Dortmund striker Pierre-Emerick Aubameyang.

On January 2, The Sun told us that Arsenal were eyeing up a move for Aubameyang.

On February 14, The Sun told us that Manchester United could sign Aubameyang. They mocked him up in a United shirt.

On Wednesday, Antony Kastrinakis has an ‘exclusive’ that Aubameyang is not for sale this summer and will not be leaving Dortmund. That’s what we thought all along.

AND THE REST
FC Midtjylland’s Pione Sisto has emerged as a transfer target for Leicester and West Ham after impressive displays against Manchester United in the Europa League…Everton target Steve Mandanda is refusing to commit his future to Marseille…Manchester City will give £28m flop Wilfried Bony the boot this summer…West Ham are keen on signing Crystal Palace midfielder Yohan Cabaye…PSG and three unnamed Chinese Super League clubs are interested in Chelsea winger Willian…Eden Hazard has no interest in moving to PSG this summer as he intends to repay the faith shown to him by Chelsea…Former Liverpool manager Brendan Rodgers believes Northern Ireland coach Michael O’Neill – who led the nation to Euro 2016 – has the capabilities to be a Premier League manager.