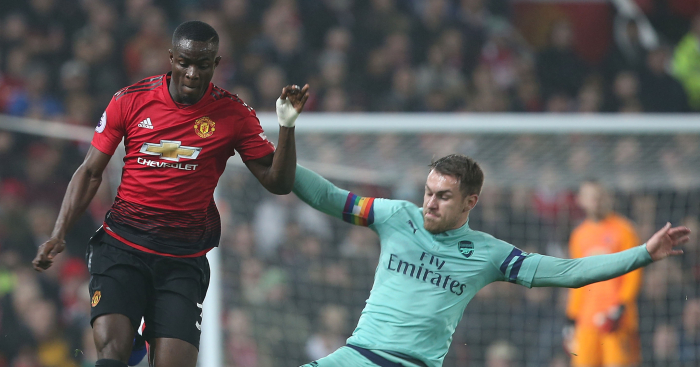 DENIS THE MENACE
“We are happy with the squad but there are always possibilities for departures for those who maybe do not feature as often,” said Ernesto Valverde at the unveiling of Kevin-Prince Boateng as a…

…Barcelona player this week. “Those players could stay here and we would be happy or they could leave in search of more opportunities, we will evaluate all possibilities for them,” the head coach continued, and Denis Suarez most certainly fits the bill: he ranks 23rd in terms of minutes played for the Catalan club this season.

The Daily Mirror say Arsenal are hopeful of having a deal to sign the midfielder ‘completed by the weekend’. But the Daily Mail suggest negotiations have ‘come to an end after talks broke down between the two clubs’.

The deal has collapsed because ‘a future permanent deal couldn’t be agreed’, what with Arsenal having no bloody money. So the transfer is either completely dead in the water or completed by the end of the week. Sven Mislintat didn’t die for this.

RAMSEY’S GREAT OPTION
The Independent strike a line down the middle. They say Arsenal are still looking to free up funds to bring in new players this month, and so Aaron Ramsey’s departure for Juventus could be fast-tracked.

Miguel Delaney reports that Arsenal are still ‘currently working’ on deals for both Suarez and James Rodriguez, but they both hinge on bringing some money into the club first. Barca will only let Suarez go if a fee can be agreed for a permanent summer move, and Rodriguez’s loan fee would be a reported £3m. So Arsenal are contemplating selling Ramsey ‘for a fee of around £10m’ instead of him leaving for free in the summer.

It is added that bringing Suarez in on loan ‘currently looks more likely’ than any deal for Rodriguez. ‘The principles’ of a move to sign the midfielder ‘are currently in place’ (someone tell the Daily Mail that), and he ‘is still expected to eventually to make the move this window’ (and that).

Real Madrid ‘would be open to a deal’ for Rodriguez, which is unsurprising considering he is literally already out on loan. But Bayern wouldn’t mind losing him either, although Rodriguez ‘prefers a return’ to Spain to ‘prove himself’.

WATCH ME WHIP, WATCH ELNENY
A couple of throwaway lines at the bottom of that article sheds light on the future of another Arsenal midfielder. Prepare the tissues, because Mohamed Elneny could be offski.

The Egyptian made just his second Premier League appearance of the season as a second-half substitute in the win over Chelsea, having last been seen in the FA Cup. He is very much on the fringes of Unai Emery’s first team, and so may very well be ‘on his way out’ of the club.

Southampton and Leicester have both been linked with the 26-year-old, who signed for £5m in January 2016. It would be genuinely intriguing to see how much they’d want for him.

BAILLY BAILLY BABY, BABY GOODBAILLY
The final piece of news from today’s Arsenal-sponsored gossip column also relates to Manchester United. So welcome to whomever has been clickbaited to this juncture. How delightful to see you.

United have apparently ‘rejected an enquiry’ from the Gunners for centre-half Eric Bailly. Ian Ladyman reports that United ‘have no interest in doing anything that might assist a Premier League rival’. Which is fair enough, particularly considering Arsenal obviously only wanted to take him on loan for the rest of the season.

In what world would United look at that offer, look at a Premier League table with goal difference separating the two sides, and think ‘yeah, let’s loan this pretty good defender out to a direct rival who need a pretty good defender. Good F***ING IDEA LADS’?

The Daily Mail do try and paint Bailly as some sort of United outcast, pointing out how he has played just once in seven games under Ole Gunnar Solskjaer. But he was suspended for three – albeit for being a little bit silly. Still, he has been on the bench in every other match for which he has been available, and Phil Jones needs someone to make him feel good about his body falling to pieces at any moment.

Emery ‘thought he could exploit the uncertainty over Bailly’s contract,’ one which has 18 months left to run, with United having a two-year extension option. He thought wrong.

AND THE REST
Real Madrid are lining up a £90m summer move for Juventus and Argentina forward Paulo Dybala, 25… Atlanta United and Paraguay playmaker Miguel Almiron, 24, is Newcastle boss Benitez’s top target… Barcelona are on the verge of beating Manchester City and Paris St-Germain to the signing of Ajax midfielder Frenkie de Jong, 21… Chelsea defender Cesar Azpilicueta’s place could be under threat with boss Maurizio Sarri keen on Napoli right-back Elseid Hysaj, 24… Newcastle have made a £4.3m bid to sign 23-year-old Portugal winger Gelson Martins on loan from Atletico Madrid… Manchester United face competition from Tottenham for the signing of PSV Eindhoven’s 21-year-old Dutch winger Steven Bergwijn… West Ham have told Austria forward Marko Arnautovic, 29, he can leave the club in the summer if an acceptable bid for him is made then.