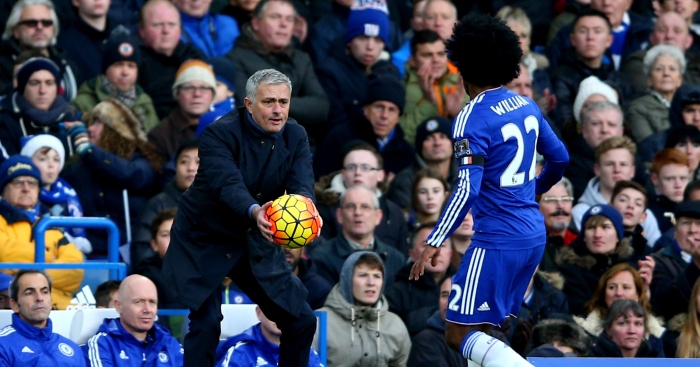 CHELSEA BRACED FOR ‘MEGA’ BID
Now that sounds like a very big bid indeed. The claim comes from the Daily Express’ old-school Chelsea correspondent Tony Banks, who says that the Blues are expecting a ‘bidding war’ after turning down Barcelona’s £50m move for Willian. Now we cannot fathom Barcelona paying £50m for the 29-year-old Willian but what do we know? Who saw Paulinho coming?

So Manchester United are now expected to make their move. Could they really pay over £50m for Willian? Probably yes. Because this is Jose Mourinho. Chelsea would understandably prefer not to sell to a Premier League rival.

MENDES TO HELP MAN UNITED TARGET MOVE
But not to Manchester United. Which seems a cheeky from Jose Mourinho’s agent. According to Tuttosport in Italy, Mendes could help broker a deal between Juventus and Sergey Milinkovic-Savic, having dealt with Juventus during the transfer of Joao Cancelo.

It seems he is also close to the Serb’s people and could open a few doors to facilitate a move from Lazio to Juventus. Manchester United will not care, of course; they have re-signed Marouane Fellaini.

EVERTON TO MOVE FOR MAN UNITED TARGET
That target is Celtic left-back Kieran Tierney, who is seen by Everton’s Marco Silva and Marcel Brands as the long-term successor to Leighton Baines. And they are apparently ready to bid £25m for the Scot, according to the Daily Telegraph.

They write: ‘Silva knows Everton’s squad needs a major revamp, despite the significant spending of a year ago. He must not only inject younger, pacier players but also offload the ageing stars he does not see as part of the future.’

Which is probably why Ashley Williams is being linked elsewhere with Stoke City.