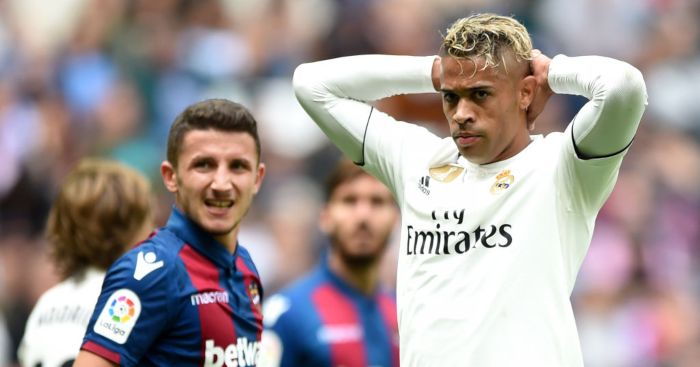 DANI, ARE YOU OKAY?
After news of their £110m swoop for five players on Wednesday comes an even bigger Tottenham transfer update on Thursday. They really are making up for those 18 barren months.

We start with Marca, who say Arsenal, Liverpool and Spurs all want midfielder Dani Ceballos. His ‘future appears to be away from Real Madrid’ as he ‘he does not fit into’ Zinedine Zidane’s Zinedine Ziplans.

Italian and German clubs have made enquiries but ‘his future seems to be in England,’ with Spurs ‘the favourites to secure his signature’. Their relationship with Real is ‘very good’, they ‘are not opposed’ to having a buy-back option included, and his 50m euros valuation should not prove too difficult.

MIDFIELD MUDDLE
One move that is a little tougher to negotiate is that of Giovani Lo Celso. Tottenham want him, he wants them, but Real Betis want about £70m.

Sky Sports say negotiations are ‘on hold for now’ because of that fee, which is a little too inhibitive for Spurs at the minute. They ‘may go back in later’ for the midfielder if Christian Eriksen is sold, but having just broken their transfer record on Tanguy Ndombele, they are reluctant to repeat the feat so soon.

A potential alternative could be Nicolo Zaniolo, who ‘has been among Pochettino’s top targets for weeks’ if the Daily Mail are to be believed.

They say Roma ‘could be tempted if bids moved above £40m’ for the player, but Tottenham could use their interest in Toby Alderweireld as leverage. Pochettino ‘is prepared to do business’ with regards to the centre-half, whose £25m release clause still looms large.

Roma need a centre-half and Tottenham need money, with interest in Kieran Trippier and Danny Rose having ‘failed to materialise’ so far this summer. Eriksen’s asking price is also proving too much for most potential suitors.

SAVING PRIVATE RYAN
John Cross of the Daily Mirror concurs that Tottenham ‘could struggle to find suitors for both Rose and Trippier’. Everton have been linked with the latter, while Crystal Palace ‘are yet to firm up their interest’.

Regardless, Cross says Pochettino ‘wants to carry on reshuffling his pack’ by concluding a ‘highly likely’ deal for Ryan Sessegnon of Fulham. The player wants the move, with ‘the only sticking point’ being the ‘sky-high price’ the Championship club will demand.

Tottenham are happy going no higher than £25m, but ‘are ready to ship out Rose to carry on their rebuilding’.

But that’s not enough. We now go to Spanish TV station El Chiringuito, whose trustworthiness correlates directly with how far we could collectively throw them. Still, they claim that Pochettino ‘has asked for Mariano Díaz’ as part of their never-ending quest ‘for a substitute striker to complement Harry Kane’.

The forward wants to stay at Real, who he joined for £33m last summer. But the Spanish side ‘prefer to cash in’ on a player who scored just four goals in 22 appearances last season. They ‘welcome his departure’ as part of their squad renovation.

Tottenham feel the 25-year-old has ‘an appropriate profile’, and Pochettino ‘supports’ the signing. It’ll cost them about £27m, if Marca’s valuations are to be believed.

AND THE REST
Chelsea have opened new contract talks with 20-year-old midfielder Mason Mount, who played under Lampard at Derby last season… Manchester United want to sign Portugal midfielder Bruno Fernandes, 24, from Sporting Lisbon, and the player’s agent is already in the UK to thrash out a deal… Leicester have been told they will need to offer Brighton £40m if they want to tempt the South Coast club into selling central defender Lewis Dunk, 27… Arsenal have been offered Barcelona’s Brazilian forward Malcom, 22, but remain focused on trying to sign 26-year-old Ivory Coast forward Wilfred Zaha from Crystal Palace… Southampton are not interested in signing Portugal forward Andre Silva, 23, from AC Milan despite reports in Italy suggesting otherwise.