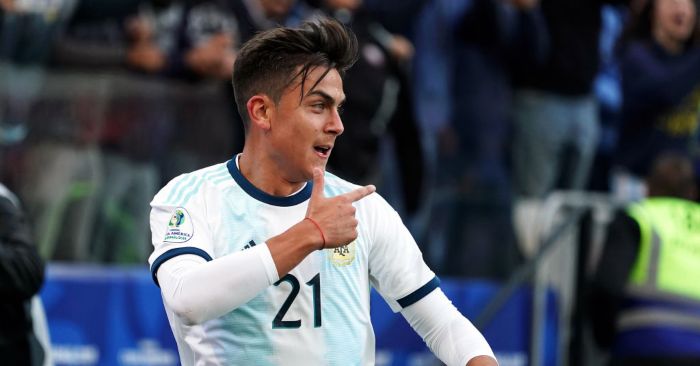 Tottenham ‘want’ Dybala
What Tottenham surely actually want is for Real Betis to know that they’re really, really interested in Paulo Dybala. Late Wednesday, a range of publishers (The Sun, The Mirror, The Evening Standard, Football.London) revealed that Spurs are ‘increasingly confident’ of signing the Juventus forward before the end of the transfer window. A world-record £80m move was widely mooted.

Dybala ‘would accept’ a move to long-term admirers Manchester United, but they are far more interested in Newcastle midfielders and Leicester centre-halves. So Tottenham appear to be using that situation to further their own objectives. The nature of the simultaneous reports from numerous outlets makes it look very much like they were briefed – the club’s way of encouraging Betis to lower their asking price for Giovani Lo Celso by pretending to take their business elsewhere.

It might work, too. Betis have already signed Lo Celso’s replacement – Nabil Fekir – and the player certainly wants to leave, so this is most likely a touch of gamesmanship. To say they hadn’t transferred in ages, they seem quite good at it.

Zaha to Arsenal rumbles on
Lower your eyebrows again for the news that Everton are apparently planning talks with Crystal Palace this week (according to Sky Sports) over the potential signing of Wilfried Zaha. The Gossip Column is old and cynical, so this does sound more like a hurry up to Arsenal than something that might actually happen.

With two weeks to go until the transfer window shuts and Arsenal and Palace still yards apart with their respective valuations, this comes across very much like Stage Two of Zaha’s exit strategy.

Gueye heading for Ligue Un
One deal that should happen does involve Everton though – and Idrissa Gueye, who ESPN report is now very close to his long-awaited move to Paris Saint-Germain. The midfielder obviously came close to leaving in January, but a fee has now been agreed – a cheap looking €32m – and he is expected to agree personal terms within the coming days.

Arsenal want Everton
Another Everton hopping on the transfer merry-go-round is of interest to Arsenal. Having enjoyed an excellent Copa America, the Gremio forward has apparently caught the eye of Edu, the club’s new technical director who previously worked with the national team, and now – *suggestive organ music* – Everton is spending his days liking the Instagram posts of new Gooner Gabriel Martinelli.

It sounds as good as done.

No United deal for Longstaff
Steve Bruce is insisting that there’s nothing to see in the Sean Longstaff to Manchester United stories. The Sun carry quotes from Newcastle’s new head coach and he sounds fairly adamant.

“We don’t want to sell our best young players, that’s for sure. So that won’t happen. I’m very confident of that.”

Bruce might want to check that with the owner, mind…

Khedira to Molineux?
Sky Italia believe that Sami Khedira might be attracting admiring glances from Wolves. The 32 year-old German international seems set to play the Danny Drinkwater role under Maurizio Sarri at Juventus and he doesn’t really fancy that, with Fabio Paritici – Juve’s sporting director – scheduled to meet the Premier League club this week.

And the rest…
Bruno Fernandes sounds like he’s staying put… Neymar isn’t taking part in PSG training, still hopeful of Barcelona return… Marco Asensio’s injury may give Gareth Bale a Real Madrid reprieve….He’s definitely not going to Liverpool…. but none of that should effect Dani Ceballos’s loan to Arsenal… where Laurent Koscielny is finished… Eros Grezda is leaving Rangers…