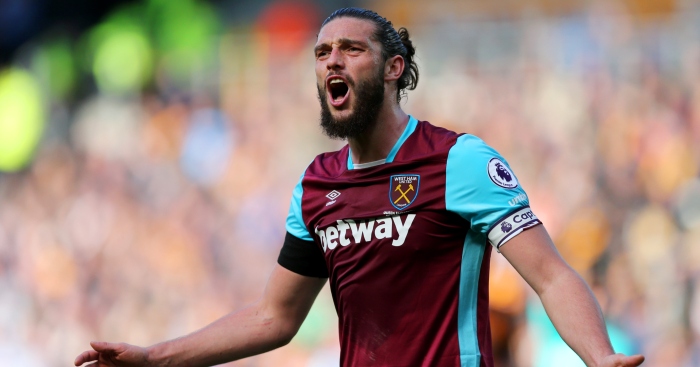 SH*THOUSE INCOMING?
It’s quite clearly nonsense but what delicious nonsense from The Sun, who claim that ‘ANDY CARROLL is a shock contender to solve the striker crisis at Tottenham’. Just lovely. Carroll is of course out of contract with West Ham this summer so The Sun have guessed – ‘could go for £2million’ indicates that guesswork – at a price. And it’s a low price.

Fernando Llorente was pretty rotten on Sunday as Tottenham found a way to do more with less once again, so why not replace him with a striker who last scored a Premier League goal in April? Because it’s mental, that’s why.

This game was lost when Pellegrini decided to start Andy Carroll. Simple as that. Absolutely bizarre decision. He’s slow, commits too many fouls, awful on the ball and just a complete liability. His miss sums him up. Antonio should’ve got the nod with Snodgrass out wide.

EVERTON ‘VERY GREEDY’ FOR GUEYE MONEY
Idrissa Gueye is rather good. So good, in fact, that he has made more successful tackles per 90 minutes than any other player in the Premier League this season; he made nine on Saturday against Southampton. So Everton really do not want to sell him to PSG for pennies. And it seems pennies are all PSG have as Telefoot report that they have only around £30m to spend in this January window on a defensive midfielder.

And so to Telefoot and a presumably dodgy translation: ‘According to our information, the PSG wants to offer 25 million euros to Everton, but the Toffees are very greedy and hope to get more money. The Senegalese hopes to join the capital.’

‘Very greedy’ for wanting more than £22m for their best midfielder? Perhaps ‘the PSG’ need to set their sights a little lower. They might get Lee Cattermole for that price.

AND THE REST
Eden Hazard will force through a move to Real Madrid – at the end of the season…Gonzalo Higuain will move to Chelsea on Tuesday, with Emerson potentially going the other way…Milan have reached a deal with Genoa to sign the Polish striker Krzysztof Piatek for €35m…Juventus in advanced talks to sign United’s Matteo Darmian on loan…Leicester City and Portugal midfielder Adrien Silva, 29, is waiting for manager Claude Puel to approve a loan move to French side Bordeaux…Aston Villa forward Jonathan Kodjia is wanted by former club Angers…Ashley Cole is on the verge of reuniting with ex-Chelsea team-mate Frank Lampard at Derby County…Marseille are confident of wrapping up the signing of Mario Balotelli in the next few days