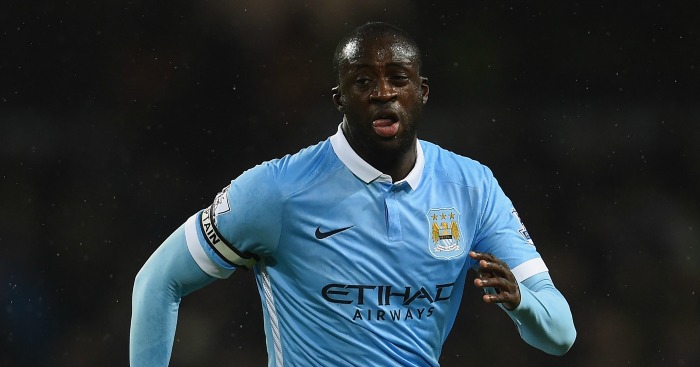 TOURE THE LATEST PLAYER OFF TO CHINA?
China really are getting into this transfer market lark. After several years of buying jobbing South American players (bar the odd exception), clubs are now throwing around their money like a drunk lottery winner in Gala casino.

Yaya Toure is the latest name mentioned, after Jackson Martinez completed a deal overnight to leave Atletico Madrid for Guangzhou Evergrande. When Jorge Mendes is getting involved, you know things are serious.

In the Daily Telegraph, Matt Law reckons that Toure could earn £30million per year in China, which is enough to make us think about putting on a kit and hanging around a Premier League stadium in vain hope. Works out at £576,923 a week, for those interested in extreme jealousy.

Toure is 32 and, while he’s clearly still important to Manchester City, that’s surely enough money to make anyone consider the offer.

LOTS ON PELLEGRINI’S NEXT JOB
With Manuel Pellegrini now officially keeping the seat warm for Pep Guardiola, thoughts invariably turn to his likely next destination. It looks like he has a few options.

Talksport say that Pellegrini could replace Gary Neville at Valencia at the end of the season, which sounds like the most logical move. They need a good manager (zing!), he needs a big job, Valencia are a sleeping giant.

Meanwhile, the Chilean media claim that Pellegrini is a target for Chelsea. It’s a weird one, because on the surface it would be a sensible, clever appointment. He knows the league, he’s won the league and he’s out of work – what’s not to love? Yet we still can’t see Roman Abramovich taking a reject from a rival, however petty that may sound.

Finally, the Mirror reckon that Pellegrini is a contender to take over at Paris St Germain in the summer. There are reports that Laurent Blanc is set to announce his future in the next few weeks, or – and more to the point – have his future determined by PSG.

Blanc is still unbeaten domestically this season, so good luck following that one.

STONES WANTS TO STAY IN THE NORTH WEST
News from The Times on John Stones now. It comes from James Ducker, their Northern Football Correspondent.

Ducker writes that John Stones does not want to move south should he leave Everton, and would instead prefer a move to Manchester United or Manchester City. That will reportedly annoy Real Madrid and Barcelona, and definitely annoy Chelsea.

‘Chelsea, who tried and failed to sign Stones last summer with four separate bids, Barcelona and Real Madrid are also interested, but while he will not discount a move south or abroad, the player’s strong preference is to stay close to his predominantly Yorkshire-based family,’ is the piece’s big line.

Hmmm, ‘will not discount’ sounds like a get-out line to us.

AND THE REST
Joe Hart’s future at Manchester City is under threat because incoming manager Pep Guardiola wants to sign Claudio Bravo, according to reports in Spain…Arsenal are likely to return this summer with bids for Fulham’s 16-year-old star Ryan Sessegnon and Leicester City left-back Ben Chilwell…Guillermo Varela is upset with Louis van Gaal after the manager blocked a Deadline Day loan to Genoa…Leicester are reportedly weighing up a move to sign French midfielder Clement Chantome in the summer…Championship side Leeds are lining up an emergency loan deal for Norwich’s out-of-favour striker Kyle Lafferty…Marseille want to turn Remy Cabella’s loan spell from Newcastle into a permanent one, activating a £6m buy-out for the France midfielder.