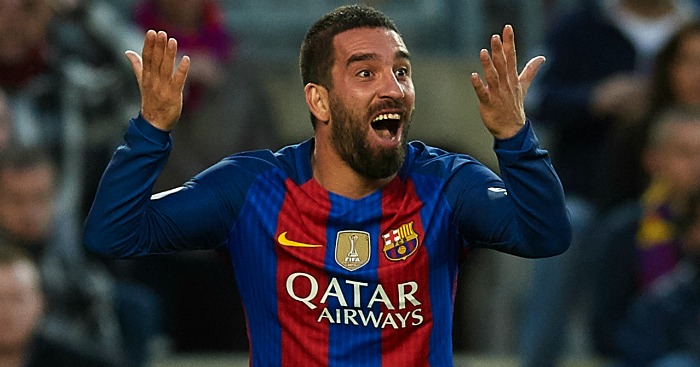 ARSENAL TURN TO TURAN
Arsenal are closing in on the signing of Arda Turan from Barcelona, supposedly to replace Mesut Ozil.

That is according to The Sun, which repeats a CNN Turk report that Barca are ready to let the midfielder leave with Arsenal at the front of the queue.

Turan is attracting interest from China – who isn’t? – but the former Atletico Madrid star would prefer a move to the Premier League.

The Turkey international has scored 13 goals and contributed seven assists in 29 appearances for Barca this term, with 19 of those coming as starts. That is a pretty reasonable record for a midfielder that has failed to convince the Catalans, but still they are prepared to cut their losses, supposedly at a loss of around £8million.

REDS TO RECRUIT ROBERTSON
Liverpool are “closing in on an £8million deal for Hull left-back Andrew Robertson”, according to the Daily Mail.

Jurgen Klopp wants shot of Alberto Moreno in the summer and despite James Milner’s performances on the left side of his defence, the manager is said to want at least one specialist in the position.

Mike Keegan’s story claims Robertson “fits the bill at an acceptable price”, especially since Klopp is supposedly keen to recruit a couple of left-backs during the coming transfer window.

Robertson joined Hull in 2014 from Dundee United, who are reportedly due 10 per cent of any fee Hull receive for the 23-year-old. The Scotland defender has been an ever-present in the Premier League since Marco Silva’s arrival, scoring one goal and creating a couple more in the new manager’s 12 games in charge.

Reports this week suggested Real are willing to pay £60million for the United keeper, though that figure and The Sun’s report today certainly don’t add up.

Morata is valued at £50million, and that is for a striker Real are prepared to get rid of. They are rather less happy at the prospect of losing defender Varane, but as Rene Meulensteen said on Friday, United have to find a way to get the most out of any deal if they are to lose their brilliant keeper.

It all sounds like both sides establishing their starting position in negotiations. Strap in, it’s going to be a long summer…

AND THE REST
Cristiano Ronaldo and Sergio Ramos tried to convince Robert Lewandowski to join Real Madrid after their Champions League win…Luke Shaw finally won over Manchester United boss Jose Mourinho following his performance against Anderlecht in the Europa League…Chelsea have joined the race for Monaco starlet Kylian Mbappe after sending scouts to watch the hotshot on Wednesday…Manchester City’s chase for Juventus defender Leonardo Bonucci has gathered pace as they line up a world record defender fee for the Italian…Atletico Madrid forward Antoine Griezmann is a £75m transfer target for Manchester City boss Pep Guardiola.

Manchester United will now step up their bid to beat Chelsea to the signing of Everton’s Romelu Lukaku in light of Zlatan Ibrahimovic’s season-ending injury…Manchester United are favourites to re-sign defender Michael Keane – just two years after they sold him to Burnley…Jurgen Klopp is using the prospect of Champions League football to tempt big-name signings as he steps up summer plans…Crystal Palace are weighing up a summer move for Southampton striker Jay Rodriguez…Everton face tough competition from Monaco to sign Belgian teenager Youri Tielemans, whom Anderlecht value at £21m.