Home All The News Gossip: Two centre-backs in, Pogba out at Man Utd 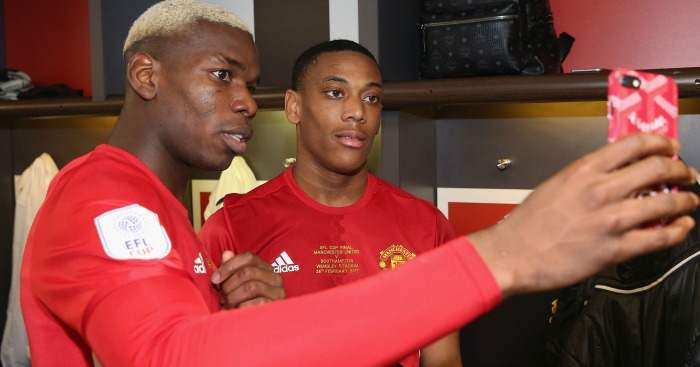 RAIOLA TO TRY HIS LUCK OVER SHIFTING POGBA
Paul Pogba is due back at Manchester United this week and, apparently, he’ll bring his agent.

The France star has been on holiday since winning the World Cup, with some reports claiming Jose Mourinho is seething at his record signing’s preference to party in LA, rather than return to Old Trafford early and help his club. Pogba will check back in at Carrington this week but numerous outlets claim Mino Raiola will be on tow.

Raiola apparently reckons he can broker a £100million deal for his client to move to Barcelona. After two largely forgettable seasons, this was inevitable. Raiola only gets paid the big bucks if he can shift his client every few seasons. Having just won the World Cup, the agent no doubt recognises that now is the time to take his cash cow to market.

Even if Pogba has failed to justify his reputation as one of the world’s finest players since returning to United, you can be certain that the Red Devils will be looking for more than £100million for a player they signed for £89million two years ago – just before the transfer market stuck a pencil up each nostril and started wearing underpants on its head.

UNITED MAKING LITTLE PROGRESS ELSEWHERE
Most of the talk around United in the coming days will surround arrivals rather than exits. And at least one of those arrivals will be a centre-back. Another one…

There has been some chatter that United have reached an agreement with Tottenham for Toby Alderweireld but Spurs won’t rubber-stamp the deal until they’ve made reinforcements of their own. Mourinho, knowing Daniel Levy, fears being strung along until it is too late so he remains very much interested in alternatives.

The Sunday Express reckons Mourinho will make an £80million move for Leicester’s Harry Maguire before the deadline, with the Foxes insistent on any fee exceeding the £75million Liverpool paid for Virgil van Dijk in January. To fund the deal, Mourinho will send Marcos Rojo to Everton for £20million, who seems to have depreciated £10million over the last few days…

All this comes after a move for Yerry Mina collapsed this weekend. The Sun says United had agreed a five-year deal with the Colombia defender who would move from Barcelona for £35million. But apparently his agent has been playing silly beggars and United pulled out after a deadline to complete the switch by Friday was missed.

Away from Mourinho’s desire to stockpile Europe’s resources of centre-backs, Anthony Martial remains a problem for Mourinho. On Friday, the Frenchman was being tenuously linked with a swap deal with Bayern Munich involving Bob Lewandowski. With the deadline inching closer, The Sun now reckons United are more open to sending Martial, 22, to Chelsea in exchange for Willian, 29, with both players valued at £75million.

AND THE REST
Chelsea are lining up a £35m move for Arsenal’s Aaron Ramsey…The Blues will offer Eden Hazard a new £300,000-a-week contract to persuade him to reject Real Madrid…Borussia Dortmund are refusing to sell Christian Pulisic…Wolves have made a £16m bid for Besiktas defender Domagoj Vida…Benfica want Manchester United full-back Matteo Darmian…Leicester are close to signing Algeria winger Rachid Ghezzal from Monaco…Arsenal have accepted a £4.45m bid from Sporting Lisbon for Lucas Perez…Tottenham’s Mousa Dembele has turned down a move to Inter Milan…Fulham have enquired about Real Madrid left-back Theo Hernandez.