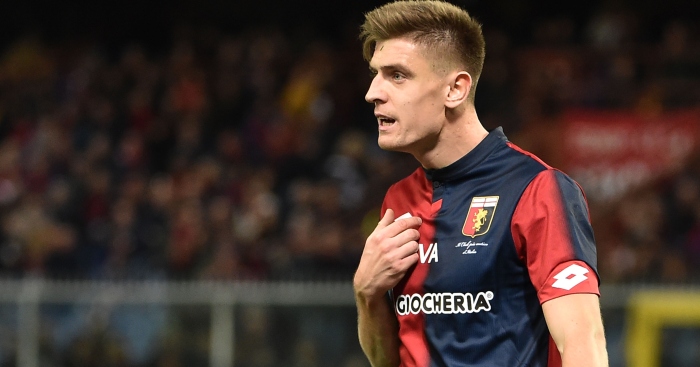 CHELSEA WANT HIGUAIN BY LUNCHTIME
The clock is ticking for Chelsea. The Blues have apparently reached an agreement with Juventus to sign Gonzalo Higuain on loan for the rest of the season and having now negotiated cleared all the hurdles to recruit the striker who is currently at AC Milan, Maurizio Sarri wants to get it over the line in time to have the 31-year-old in his squad for the trip to Arsenal on Saturday.

That means the paperwork has to be wrapped up by midday today. Higuain has been a busy boy already this week having flown back to Italy from Saudi Arabia in the early hours of yesterday morning after playing for Milan against his parent club in the Italian Super Cup. The Rossoneri might drag things on while they search for a replacement.

Which brings us to Kryzsztof Piatek…

WEST HAM FAIL IN STRIKER BIDS
The Genoa striker has scored 19 goals in 21 games this season and Real Madrid are known to have taken an interest.

But West Ham have moved rather more urgently as they look to sign a forward before they sanction the sale of Marko Arnautovic to China. The Daily Mail reckons they have made two bids for the 23-year-old but Genoa are in rather less of a hurry. They know Milan are keen on Piatek as a replacement for Higuain so they would rather wait for a bidding war.

Arnautovic will probably fetch West Ham around £45million, which won’t be in their bank account long enough to gather any interest. Piatek is valued at around the same figure, as is Callum Wilson and, conveniently, so is the release clause in Maxi Gomez’s Celta Vigo contract.

LIVERPOOL EYE USA STARLET
Having spent £100million on midfielders in the summer only for the engine room to remain Liverpool’s biggest problem, Jurgen Klopp is said to be considering chucking another £20million at it.

The Sun reckons Schalke’s Weston McKennie is a target for the Reds, with the club pondering a move this month or in the summer for the USA international.

The 20-year-old Texan has started just less than half of Schalke’s Bundesliga and Champions League games this season while playing at every position through the centre of the pitch. That versatility is understood to appeal to Klopp, though McKennie is the type of midfielder to shield his own defence rather than open the opposition’s and Klopp can’t move for those players at Anfield.

AND THE REST
Aaron Ramsey has signed a pre-contract agreement with Juventus worth £300,000 a week… Chelsea are prepared to offer Callum Hudson-Odoi a new deal worth £50,000 per week rising to as much as £70,000… The Blues are also closing in on a £31m deal for Zenit St Petersburg midfielder Leandro Paredes… Manchester United will double Marcus Rashford’s wages to £150,000 a week… United’s first January signing will be 16-year-old Amiens forward Noam Emeran… Tottenham have revived their interest in Barcelona flop Malcom… Celtic will only make a move for Man Utd’s Scott McTominay if another midfielder leaves Parkhead… Fulham have targeted Burkina Faso midfielder Bryan Dabo, currently at Fiorentina… Inter Milan are set to offer Milan Skriniar a new contract.