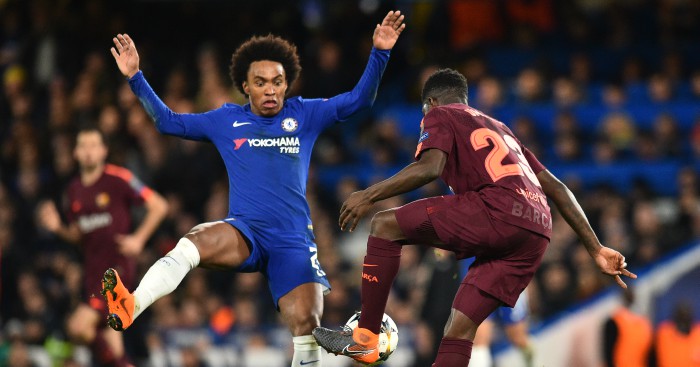 MAN UNITED ‘LURK’ OVER UMTITI
It sounds more than a little creepy but Goal claim that Manchester United are ‘lurking’ as Barcelona are forced into a delay in finalising a new contract for defender Samuel Umtiti. It’s all conjecture but they claim that United ‘have the opportunity to snap up the 24-year-old France international for €60m under the terms of his existing contract’.

Well they do. But you have already said that ‘Barcelona have agreed terms with Samuel Umtiti over a new long-term contract’, so the idea that United could scupper that between now and July seems a tad bizarre. Especially as Umtiti is playing in a Barcelona side that could yet win a treble.

MAN UNITED SPEND FOR JOSE
‘Proposals for Old Trafford to be expanded to a capacity of 88,000 are likely to be scuppered by Manchester United’s desire to back Jose Mourinho in the summer transfer market,’ says the Daily Mail. Because £300m in less than two years really isn’t enough to challenge for the Premier League title.

So who do they want? Well, handily the Mail (and The Sun) have come up with six names. Nice’s Jean Michael Seri is said to be a £35m target, along with Lazio star Sergej Milinkovic-Savic and Napoli’s deep-lying playmaker Jorginho. Victor Wanyama and Toni Kroos have both been mentioned too.

But The Sun claim that Willian ‘could be the most likely to make the move to Old Trafford’. Well he could. They claim that he would cost around £40m. But the Daily Star says that AC Milan are also interested.

WILSHERE COULD LEAVE ARSENAL
Surely not. The Sun claim that Jack Wilshere could yet leave Arsenal as his representatives and the club are ‘miles apart in talks’. They say that there is ‘NO chance’ that the England midfielder will sign a new contract at just £90,000 a week – 25% down on his old contract because of persistent injury problems.

They say: ‘Fans’ favourite Wilshere is particularly hurt by Arsenal’s stance because he worked hard to prove his fitness after suffering serious injury problems in the past.’

If even Jack Wilshere is disillusioned at Arsenal, the end is surely nigh or Arsene Wenger.

AND THE REST
West Ham are ready to sign Northern Ireland defender Jonny Evans for £3m from West Brom at the end of the season…Juventus are keen to conclude the signing of Liverpool midfielder Emre Can…Slovenian goalkeeper Jan Oblak is yet to renew his contract with Atletico Madrid, with Liverpool, Paris St-Germain and Arsenal all interested in the player.