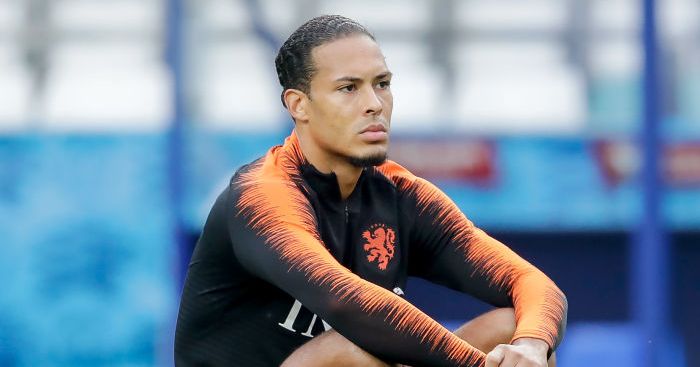 ON THE VIRG
On Sunday morning, it was reported that Virgil van Dijk had ‘agreed his massive new contract’ with Liverpool. It came as a relative surprise to most, with few having claimed that negotiations were even taking place, or that the centre-half or the club wanted to improve his current terms. But there it was, stated with such certainty.

The Sunday Mirror even went as far as to saying the new contract was ‘down to’ Harry Maguire’s move to Manchester United. Talks were said to have been ‘ongoing’ all summer but Dutch sources say they were ‘successfully concluded’ in the aftermath of him being dislodged as the world’s most expensive defender.

‘The final details’ were ‘sealed last week’ on a contract to keep him at Anfield until 2025 on £200,000 a week – an increase on the £125,000 deal he signed in January 2018. That contained numerous clauses involving bonuses for clean sheets and appearances, but this new development meant there was ‘less dependency on the additional payments than before.’

While discussions were being held before Maguire’s move, Neil Moxley says ‘that transfer gave Van Dijk’s representatives the target for what they needed’.

Except now the Liverpool Echo say Van Dijk is ‘bemused’ by the claims, and Liverpool themselves ‘have no imminent plans’ to extend his contract.

They add that the centre-half ‘has not agitated to secure an improved pay packet’ and ‘is unlikely to rock the boat to bolster his bottom line’. The deal he signed when he joined takes him through to 2023, and as Liverpool have an option to automatically extend that by one year, they ‘are in no rush’ to do anything.

Who to believe: the propaganda machine with an inside source, or the Midlands-based national journalist with no real record of breaking Liverpool exclusives? Tough one.

SIMPLES, SERGEJ
Italian outlet Il Messaggero miss a trick by not explicitly naming Manchester United in their story that Sergej Milinkovic-Savic is signing a new contract at Lazio. Don’t they know all new deals are triggered by something happening at Old Trafford?

They do say that club president Claudio Lotito is preparing to ‘armor the Serbian in a way never seen before in his management. Not only will they increase his current wage and extend his stay, they will ‘act above all on assists and goals’. Ciro Immobile is said to have pretty much doubled his wages in his first two years with the club through such bonuses, with Milinkovic-Savic given the incentive to do the same.

In return, the midfielder will remain with Lazio until 2024, and he and agent Mateja Kezman ‘have already started talking about it’. The insertion of a release clause standing at around £134.9m to £107.9m has also been mooted, but ‘ is just an idea’.

PALM OFF
This gossip column is sponsored by new contract, because Chelsea are being scared into handing out one to Emerson Palmieri.

The left-back, whose injury suffered on international duty has sparked fears that Marcos Alonso might have to be dusted off to play in a back four, has been the subject of Juventus interest.

Goal say Maurizio Sarri ‘explored the potential of signing’ him in the summer, so Chelsea ‘have begun talks’ with Emerson to get him to commit his future to Stamford Bridge before January.

The Blues ‘are keen to warn off any more potential suitors’. Considering Emerson is one of the few first-choice defenders who has not embarrassed himself so far this season, that is understandable.

AND THE REST
Barcelona are preparing a contract for Argentina forward Lionel Messi, 32, to keep him at the club for the rest of his career… Manchester United and Manchester City are set to compete for the signing of 20-year-old Benfica midfielder Florentino Luis… France midfielder Paul Pogba, 27, stayed at Manchester United instead of moving to Real Madrid because of a £150m sports sponsorship deal… England left-back Danny Rose, 29, wants to stay and fight for his place at Tottenham Hotspur despite interest from other clubs and the arrival of Ryan Sessegnon, 19, from Fulham over the summer… Real Madrid will reignite their interest in Ajax midfielder Donny van de Beek, 22, in the summer 2020 transfer window… Leeds are close to securing a five-year extension to 23-year-old midfielder Kalvin Phillips’ contract, after the player was the subject of interest from Aston Villa and Burnley in pre-season.