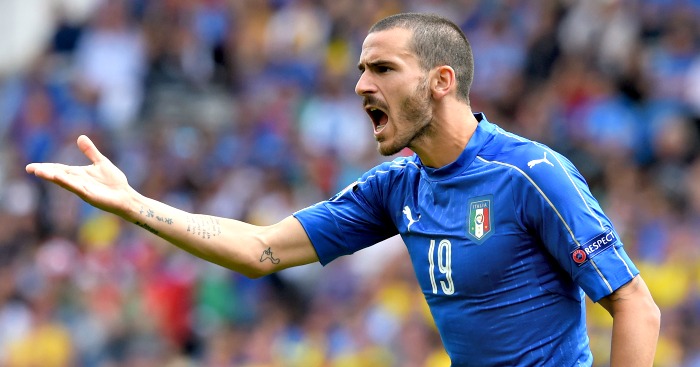 VARANE TURNS DOWN MAN UNITED MOVE…
Manchester United supporters might be wildly celebrating about the potential arrival of Paul Pogba, but don’t think that everything is coming off. That’s because Spanish newspaper Marca are claiming that Raphael Varane has rejected a move to United.

Now, Marca definitely wouldn’t just be saying this because they are bitter about Pogba not coming to Real Madrid. Oh no.

Apparently, Varane would prefer to stay and fight for his first-team place at the Bernabeu. After a series of injuries, the Frenchman is now behind Sergio Ramos and Pepe in the pecking order.

Jose Mourinho brought Varane to Real Madrid from Lens in 2011, and had been expected to land the defender.

…SO THEY WANT BONUCCI OR STONES
Don’t get down though, United fans. Not that you were anyway. Paul bloody Pogba!

For ESPN, Miguel Delaney reports that United have joined city rivals City in the race for Juventus central defender Leonardo Bonucci. That signing would make it a ridiculously good window for Jose Mourinho. Are we talking title winners?

However, ESPN to mention that City are far further along in their negotiations for Bonucci, meaning United could pursue their interest in John Stones.

What has Ed Woodward been eating for breakfast this summer?

CHADLI OFF TO SWANSEA
You have to feel a little for Nacer Chadli. After a slow start to his Tottenham career the winger actually improved quickly and was excellent in 2014/15. However, he lost his place last season as Spurs surged up the league, and is now on the fringes of the squad.

So where do you go when it’s not working out at Tottenham? Ok, apart from Sunderland. Swansea, that’s where.

The Times believes that Chadli could follow the lead of Gylfi Sigurdsson, Kyle Naughton, Tom Carroll, Steven Caulker and, erm… Giancarlo Gallifuoco, by moving to the Liberty Stadium. The fee is thought to be around £10m.

It’s a transfer that just makes you feel nice inside, perfect for all parties.

AND THE REST
Manchester City have launched a £50m bid to sign Toni Kroos from Real Madrid… Liverpool’s Jon Flanagan is pondering a loan to Burnley… Chelsea boss Antonio Conte is prepared to go in with a third offer for Real Madrid’s Alvaro Morata… Aston Villa have had a £5m bid rejected for Bristol City’s Jonathan Kodjia… Hamburg have lined up a bid of £8m for Jordan Ayew but Aston Villa want to keep the striker… West Brom and Sunderland have shown interest in Lorient striker Benjamin Moukandjo… Wes Morgan has urged Riyad Mahrez to follow his lead and sign a new contract at Leicester… Stoke chairman Peter Coates is prepared to play hardball over signing Saido Berahino and won’t be rushed.