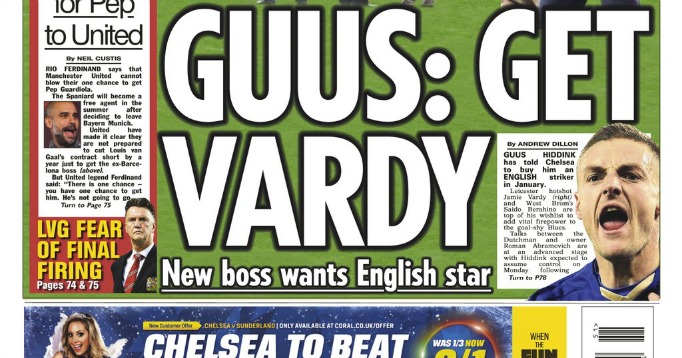 HIDDINK TELLS CHELSEA TO BUY AN ENGLISH STRIKER…
It does sound a slightly strange request from an interim Dutch manager, but The Sun claims that Guus Hiddink has told Chelsea to buy him an English striker in January.

Apparently, Jose Mourinho was reluctant to sanction a £30m move for Vardy. Given that he’s 28 and has looked great for five months, it’s fair to say that we’re on Jose’s side on this one.

Surely even Chelsea wouldn’t be short-termist enough to pay top whack for Vardy? And as for Berahino at Chelsea for £25m. Really?

…OR TO BUY THREE OTHERS
The London Evening Standard regularly makes wild transfer claims that end up at nought, and it’s fair to say that they’ve gone all out on this one. Not quite ‘£1bn for Messi, Suarez and Neymar all out’, but still.

The bulk of the Standard’s story is about Vardy coming in January, but they slip in a little paragraph afterwards:

‘Chelsea are also planning to make bids for Alex Teixeira, John Stones and Marquinhos next month.’

As casual as that, somewhere in the region of £120m-worth of bids dropped into conversation like it’s reflecting on the mild weather we’ve been having.

BARCA PLAN COUTINHO MOVE
Barcelona’s raid on Liverpool for Philippe Coutinho all feels very inevitable. We have already passed the public displays of affection stage, with various Barca players discussing just how sexy it would be to have the midfielder at the club. Now come the PR leaks about when they will make a bid.

In fairness, this latest update is verging on guff. The Daily Express say that Luis Enrique wants to play Coutinho behind Messi, Neymar and Suarez, and so will make a bid. For Coutinho to play there it means being one of the three midfielders in a 4-3-3, which sounds like cramming a round player into square hole.

Also, the Express use the classic ‘reports in Spain suggest’ line without quoting their source, which always makes us suspicious.

ARSENAL IN FOR BROZOVIC
News out of Italy now, courtesy of Corriere dello Sport. There are at least less reliable outlets in that fine country.

They report that Arsenal are prepared to pay £13.7m to sign Internazionale midfielder Marcelo Brozovic.

Any move is all a bit messy as Brozovic is only officially on loan at Inter from Dinamo Zagreb, but they have an obligation to make the deal permanent. The word is that they will then immediately sell him to Arsenal, which seems a little odd. We’re still sticking to our hunch that Ruben Neves, and not Brozovic, will be Arsenal’s central midfield signing in January.

However, the Metro’s version of the story did contain this excellent line: ‘According to Corriere dello Sport, the Gunners are ready to pay £13.7m to get the 23-year-old signed, which is more than the £11.9m Inter are reportedly willing to accept.’

It is indeed more. Top maths.