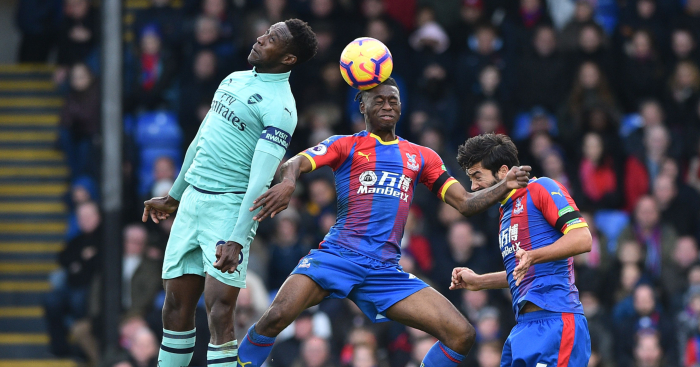 PEP WANTS AWB
Not content with having the best English right-back on their books, Manchester City are eyeing the second-best, with Crystal Palace’s Aaron Wan-Bissaka (who has been named in our Perfect Premier League XI) reportedly on their radar. He should be; he is brilliant.

We mostly enjoy the way in which the Daily Mirror report these ‘discreet enquiries’, which really do not sound discreet at all. Everton have also been linked with the England Under-21 man but City’s interest would presumably blow the Toffees out of the water.

ROY WANTS DAT GUY
Now this is a transfer that absolutely makes sense. The Sun claim that Crystal Palace want to sign Danny Welbeck for £10m in January. And as they need a striker, he needs games and Arsenal would quite like £10m for a player they would lose for nothing next summer, it sounds like everyone is a winner.

Welbeck scored 14 goals in 30 England appearances for Hodgson so the Palace manager knows exactly what he is getting from a player who is remarkably still only 27.

HAMMERS WANT RLC
But they won’t get him, according to the Daily Mirror. They claim that Chelsea boss Maurizio Sarri has ‘slammed the door’ on West Ham’s hopes of signing Ruben Loftus-Cheek on loan in January as they want to keep him themselves for Europa League, Carabao and FA Cup duty.

Why would West Ham want him anyway? They have Robert Snodgrass.

AND THE REST
Under-pressure Fulham manager Slavisa Jokanovic believes he will get this weekend’s game against Liverpool to try to save his job…Callum Wilson is being linked with Chelsea…Bayer Leverkusen winger Leon Bailey is still being tracked by Manchester United and Chelsea…Watford have expressed an interest in Iran international full-back Milad Mohammadi.