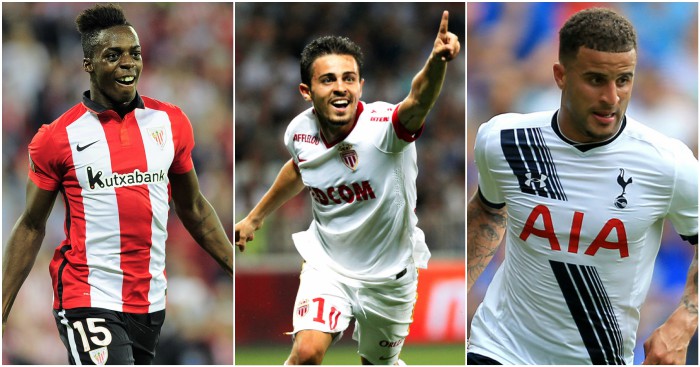 LIVERPOOL IN FOR INAKI WILLIAMS
Gossip is thin on the ground this morning, so we’re starting in an Italian piazza with the great bunch of lads at Calcio Mercato. Or something.

Their report says that Liverpool have emerged at the front of the queue to sign Inaki Williams from Athletic Bilbao. They call him a striker, but it’s worth pointing out that he has actually started wide on the right for most of his appearances this season.

Still, it’s easy to see why Klopp might like him. Williams is young, versatile, fast and could be used either centrally or drift out wide. That sounds right up Liverpool’s Sesame.

We also have quotes from Williams:

“I’m happy in Bilbao but if a concrete offer comes in from elsewhere then I’m happy to sit round the table and discuss my options with my agent and the club.”

The only sticking point is the €50m buy-out clause.

MAN UNITED IN FOR BERNARDO SILVA
Another section and another English club being linked with a little gem from the continent. This time, Manchester United are said to have ‘opened talks’ with Monaco over the signing of Bernardo Silva for £70m. Oof.

Now, we’re not saying that the Sun’s report is low on detail and vague, but bugger me it’s exactly both of those things. See here:

‘Manager Jose Mourinho is thought to be big fan…’

Is Borat writing this story?

So you don’t know the fee.

‘United are thought to have already started talks over a June transfer.’

Sit on the fence, why don’t you?

‘It seems they might negotiate an option on the player…’

MAN CITY LINKED WITH WALKER AGAIN
At some point you get the feeling that Manchester City are going to make a whacking great offer for one of Tottenham’s full-backs. We’ve heard plenty about reported interest in Danny Rose, and now it’s Kyle Walker being linked with a move.

In truth it’s a throwaway line from Sam Wallace in the Daily Telegraph, with a potential move to West Ham for Bacary Sagna the lead in the story, but Wallace writes that City may test Tottenham’s resolve to keep Walker.

That probably depends on what kind of money City are offering. Walker has been superb for Tottenham over the last two years, but if City were to offer more than £40m, surely Tottenham would take the money and look to reinvest in the squad?

AND THE REST
Kurt Zouma has warned Antonio Conte that he could leave Chelsea in search of regular football this summer… Petr Cech will not be leaving Arsenal in the summer, according to the goalkeeper’s agent… Pep Guardiola says Manchester City have no plans to sell Sergio Aguero this summer… West Ham lead a three-way Premier League fight for Atletico Madrid’s Thomas Partey, with Watford and Middlesbrough also interested… Erm, that’s about it. Sorry.