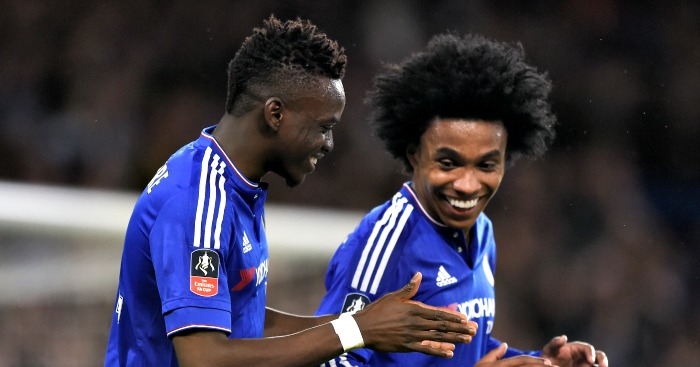 MANCHESTER UNITED TARGET WILLIAN
We’ll begin with an exclusive from the Daily Express’ Tony Banks, who claims that Manchester United will try and sign Chelsea’s Willian in January.

It’s not the stupidest shout. Jose Mourinho was a huge fan of Willian during his time at Chelsea, and the Brazilian has fallen out of favour slightly in recent weeks. Pedro’s form makes him impossible to drop.

Banks claims that Mourinho sees Willian as vital to his Manchester United project, and will make a £25m bid in January. Because what United really need is another attacking midfielder/wide forward? Lingard, Young, Mkhitaryan, Martial, Rooney, Rashford and Depay. Sure, Willian too.

WILL HUGHES TO MAKE PREMIER LEAGUE MOVE?
Will Hughes seems to have been around for ever, but is still just 21. He’s played 122 Championship games for Derby County and 17 for England’s Under-21 team. That’s despite suffering a dreadful injury last season.

It now seems as if Hughes might have got fed up of waiting for Derby to reach the Premier League. The Daily Mirror are reporting that Hughes has rejected the offer of signing a new contract at the club. His current deal expires in 2018.

That will understandably alert a number of Premier League clubs, with Liverpool previously being strongly linked with  a move.

However, the Mirror do also mention that the reason Hughes turned down the offer was because it was for less than Derby’s highest earners are being paid. Should Derby match those wages, might he stay?

MIKEL OFF TO CHINA
It’s pretty easy to forget that John Obi Mikel is still a Chelsea player. Having started 19 Premier League games last season, the Nigerian has been non-existent  under Antonio Conte. Not only has Mikel not played a league minute this season, he’s not even been on the bench.

Now 29, Mikel could be the latest player to head for the lucrative world of the Chinese Super League. Andre Villas-Boas, manager of Shanghai SIPG, is reportedly interested in the midfielder.

Villas-Boas replaced Sven-Goran Eriksson in the role last month, and is being paid a king’s ransom for the privilege. Mikel might well be packing his bags and heading to the railway station as the gravy train pulls in.

AND THE REST
Huddersfield manager David Wagner has rejected a return to the Bundesliga with Werder Bremen or Ingolstadt… Andre Schurrle has lambasted his old boss Jose Mourinho for destroying his Chelsea ‘dream’… West Ham are interested in signing Rennes winger Kamil Grosicki… Steven Gerrard is set to return to Anfield to join Liverpool’s Academy coaching staff… Stoke boss Mark Hughes is facing the prospect of losing Wilfried Bony in January after it emerged he has a release clause which allows him to be sold to clubs in China… Manchester United winger Memphis Depay is wanted by Russian side Spartak Moscow… Bob Bradley has ordered Swansea striker Fernando Llorente to silence his agent .