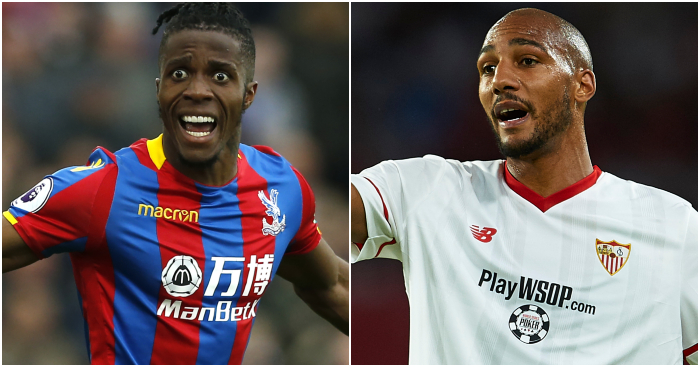 WILF REJECTS PALACE OFFER
That sound you can hear is Tottenham’s ears pricking up. Apparently Wilfried Zaha is looking for a move…

The Sun claims the Palace winger has turned down a new contract worth £125,000 a week and he fancies trying his luck again on a bigger stage.

Palace aren’t going to let their prized asset leave without a fight. Their latest offer comes 15 months after Zaha comitted to a five-year contract on wages of £100,000 a week. They are expected to go back with another offer, but it may be futile.

Zaha has a dilemma. After failing to make the grade at Manchester United, he has obviously developed into a player that would be an asset to most clubs in the big six. But he also knows he has it good at Selhurst Park as the talisman of his boyhood team. The minimum he’s guaranteed in the coming weeks is a pay rise.

Everton are also said to be interested but, let’s be honest, Zaha will have grander plans than Goodison Park. Borussia Dortmund are sniffing too…

EMERY EYES ANOTHER SEVILLA MIDFIELDER
Seemingly having failed to sign one Sevilla midfielder, Unai Emery is going back for another.

Ever Banega has apparently been persuaded to stay in Spain, but Arsenal may have a bit more joy in trying to lure Steven N’Zonzi. Sky Sports claims the Gunners are extremely interested in the France international, while The Sun claims the former Stoke star has told Sevilla he wants to return to England.

With a deal for Sampdoria screener Lucas Torreira set to gather pace now Uruguay have been dumped out of the World Cup by N’Zonzi’s France, there appears to be a real prospect that Arsenal could finally have a midfield that won’t fall in like a undercooked flan at the first sign of danger.

BARCA TO TELL EVERTON TARGET TO PACO HIS BAGS
Everton’s search for a functioning forward has apparently taken them to Barcelona. While enquiring over centre-back Yerry Mina, according to Sport, the Toffees also asked about Paco Alcacer and they weren’t told ‘no’.

In fact, Barca want rid of the striker. They are due to meet the 24-year-old’s representatives this week when custard pies will be served.

Alacacer joined Barca from Valencia for €30million two years ago and the Catalans are keen to recoup as much of that investment as possible.

AND THE REST
Real Madrid want Cristiano Ronaldo to tell the club’s fans he was not forced out if he moves to Juventus…Manchester United enquired about signing Ronaldo but were told there had been significant progress in talks about him moving to Juventus…PSG are willing to pay more than £100m for Chelsea and France midfielder N’Golo Kante…West Ham would be open to Dimitri Payet returning from Marseille if he lowers his wage demands…Jack Wilshere has started a medical at West Ham ahead of a three-year deal and a package worth £5m…Southampton’s Jordy Clasie looks set to return to former club Feyenoord…Saint-Etienne have upped their offer for Sunderland outcast Wahbi Khazri…Fulham and Palace want Yann M’Vila from Saint-Etienne.